Home » All Sections » River Life: The Mystery of Beached Whales 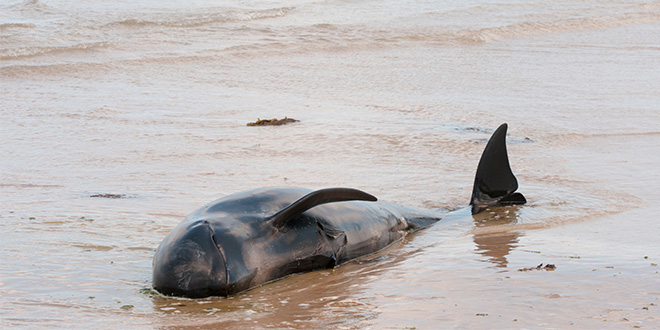 The recent stranding of pilot whales on St. Simons Island has once again raised the question of “why?” We wish we had an answer but we don’t. Scientists have spent decades studying whale and dolphins beaching themselves. Even with all of our very sophisticated scientific instruments, we still don’t have a definitive answer. There is probably not a single cause.

People don’t always understand why we can’t figure out why these large animals would suddenly come into the surf and onto the beach. This is during a time when people see television shows where extremely complex chemical analyses are done in minutes, whereas in real laboratories it can take days. We remain perplexed when these magnificent and charismatic megafauna are all over the beach and the news.

A large part of the problem is how we study whales and dolphins. Most of what we know has come from studying carcasses that washed up on our shores, or were killed during whaling. Living animals are those captured or born into captivity that are on display or performing in aquaria and zoos. It is particularly hard to capture and study healthy marine mammals in their natural habitat.

Many of these animals, but not all, will show some particular symptom, like no food in their stomach or intestine, or parasites in their inner ear. Some will test high for a toxin or pollutant. We may find plastic material in their stomach.

Beachings, or strandings, have been known to occur for centuries, and at locations around the world. So it is not necessarily a recent consequence of plastics or pollutants, nor is it tied to one location. In addition to the St. Simons stranding, recent reports have come from Iceland, New Zealand and the west coast of Florida.

It does appear that these events are happening more frequently, but that may be due to more people in, or on, the ocean, and the advent of modern communication that links us instantly to breaking news as it happens. During the St. Simons beaching, I was talking to one of my former students who lives there while a local television station was calling to get my opinion on what was happening.

That brings up the “what to do?” question. We have figured out that not all animals involved in a stranding are automatically ill or dying. Many seem to be following a leader in some sort of herd or pod behavior. So it is important to keep the animals wet and to get them back into the water as quickly as possible. When a marine mammal comes on land, the sheer weight of the animal prevents it from breathing. Without the buoyancy of the water, they can die from suffocation on dry land. When possible, keeping them offshore and in the water is also recommended. But that can be difficult to do.

Scientists will continue to study these unfortunate events and maybe we’ll eventually find the cause, or causes. Meanwhile, we can all do our part by taking care of our own mess and trying to reduce our impact on the environment. Every little bit helps, even if it is just not using one plastic straw.

River Life runs the first Tuesday of each month in The Florida Times-Union. E-mail Dr. Quinton White, executive director of Jacksonville University’s Marine Science Research Institute, with questions about our waterways at qwhite@ju.edu.