Home » Topics » Academics » River Life: The Manatees are Back! 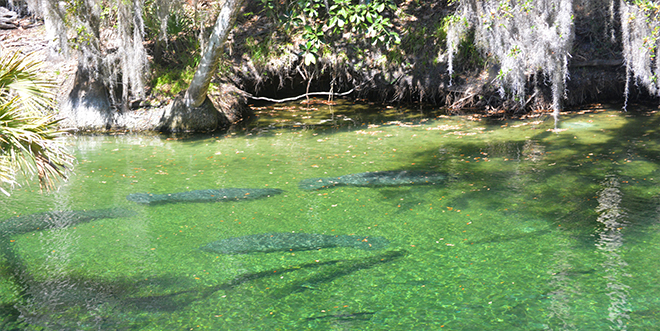 River Life: The Manatees are Back!

The manatees are back, the manatees are back! At least that is what it felt like last week at Jacksonville University. Despite the still cold water, we had a manatee visit our boat dock. There is nothing like one of these charismatic megafauna appearing to cause students to get excited. Most manatees leave the northeast Florida area every winter when the water temperatures drop below 60 degrees. And while water temperatures are still what I would consider cold, they are rising above 60 degrees during these bright sunny days. When the water is below 60 degrees, it is potentially fatal to manatees who may suffer from cold stress and can die.

Manatees, also known as sea cows, are thought to be the mystical mermaids of the classics. I have never understood how a sailor could mistake a manatee for a mermaid. But I have never had to live on a sailing ship with a bunch of guys for years at a time either.

When it is cold, manatees migrate to Florida’s warm springs. Blue Springs State Park is one of the more popular places for manatees to go during cold weather. On Feb. 5, 2021, a record 624 manatees were counted by park staff. This exceeded the previous high of 566 counted last February. I happened to visit Blue Springs with some JU students this year on Feb. 25 but only saw 13 manatees. The water had warmed, and the manatees had left the spring, probably in search of food.

This increasing population is encouraging. I appear in a video in the early 1980s predicting that manatees would be extinct in our lifetime if we didn’t do something. At that time, more were dying each year than were being born. Simple math. The good news is that we did something. Today, no one wants to hurt a manatee, but at one time, they were hunted for food.

We have watched the number of manatees counted during the annual synoptic sampling gradually increase since the count was started in 1991. Synoptic sampling is when multiple agencies across the state, including staff from JU, all fly over the entire state in a one- or two-day period. What you count is the minimum number of manatees, there may be more that we cannot see. In 1991, 1,267 animals were sighted, while in 2019, the last time that we flew, 5633 were observed. This was down from the 2017 high of 6620. Today, manatees are a long way from extinction, but we need to maintain our current successful rules and regulations to insure their survival.

That includes rescuing manatees when they suffer from cold stress or are injured. They can be taken to several zoos or aquaria around the start to recover. In February of this year, 23 manatees were released back into the wild, including five that came from our own Jacksonville Zoo and Garden’s Manatee Critical Care Center.

Yes, manatees are back, but let’s continue to work to ensure their survival. If you are boating, wear polarized sunglasses to reduce glare, watch for the tell-tale (or tail) swirl of water when manatees dive, and obey the slow speed manatee protection zones. And always slow down in shallow water near shore. It protects, not just the manatee, but your propeller too.

Glad you asked River Life
Recently there was a tragic accident when a sport fishing boat hit and killed a right whale calf. Where did the name right whale come from?

The species was named right whale because it was the easiest whale to hunt and kill. They swim slowly, often close to shore, and float when they are harpooned and die.  As a result, they were hunted to almost extinction. We need to do our part to save these gentle creatures. Regretfully the outlook is not very encouraging. In order to safeguard right whales, federal regulations prohibit being within 500 yards or 5 football fields of a right whale. Any vessel within 500 yards of a right whale needs to depart the area immediately at a safe, slow speed.