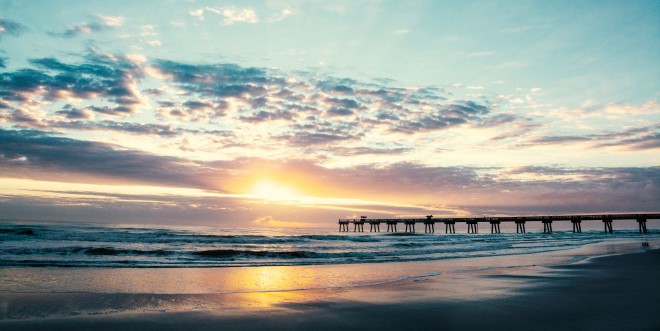 River Life: Taking a mental stroll on the beach

Was it really March last week and was it really 90 degrees? Sounds like a great time to escape to the beach. That had been my original intention until COVID-19 changed all of our plans.

It would have been so nice to stroll along the hard-packed sand down near the water’s edge. There is so much to see if we just take a few minutes to look closely at the activity. Often there are shore birds, maybe a sanderling, or one of the gulls, or maybe a ruddy turnstone darting up and down the beach in synchrony with the waves. You can watch as they carefully poke and pick at the sand.

They are searching for food. Two common prey are small bean clams, or coquina, and the sand crabs, which are also known as mole crabs. Both move up and down the beach face with the tide. Some past readers may recall that I did my doctoral dissertation on the rhythmic behavior of mole crabs.

Coquina occurs in large numbers along the beach, and if you don’t find them alive, you find their colorful shells. In fact, their scientific name, Donax variabilis, refers to the variable color of the shells.

If you find enough live ones, you can make a kind of marine biologist’s Stone Soup. You take the coquina and rinse them well with cold water, put them into a pot with enough water to cover and bring to a boil. After boiling for a few minutes, remove from the heat, and allow to cool and let the shells settle. Carefully decant the liquid from the shells, save this broth and throw the shells away. The clams are extremely sandy, and it is impossible to separate the small bits of clam from the sand.

At this point, add some carrots, potatoes, peas, corn or any other vegetables you might have, return to a simmer and cook until the veggies are soft. Season to taste with sea salt (of course), pepper and any available herbs and spices. Enjoy! Now you know why it is a marine biologist’s Stone Soup.

The other prey sought by the shore birds are the mole crabs. They are more useful as pompano bait than edible by humans. They too move up and down the beach with the tide. The ones you see swimming in the tidal swash (yes, that is the term for the area on the beach where waves wash) zone are almost always female.

Later in the summer they are more colorful with bright-orange eggs attached to their abdomen. The males are much smaller, almost microscopic, and embedded in the egg mass of the female. The males eventually grow larger and swim on their own, but are always much smaller than the females.

There is so much to see and enjoy on the beach. Much of it is unseen, beneath the sand, or hidden by the waves. But we’ll save that for another column. We may be off the beaches for a while. Meanwhile, stay safe, wash your hands and practice social distancing.

What do you think are the critical skills someone needs to be a marine scientist?

They are the same skills you need to be successful in any scientific career: critical thinking, interest in math and science, and the ability to write and speak well. If you want to study the ocean and marine life, you must be observant and ask thoughtful questions. Looking at the world in a systematic and scientific way and having the ability to understand mathematical relationships is also important. And last, but certainly not least, is the ability to convey what you have learned in clear language, whether written or spoken.

River Life runs the first Tuesday of each month in The Florida Times-Union. Email Quinton White, executive director of Jacksonville University’s Marine Science Research Institute, with questions about our waterways at qwhite@ju.edu. For more on the MSRI, visit ju.edu/msri