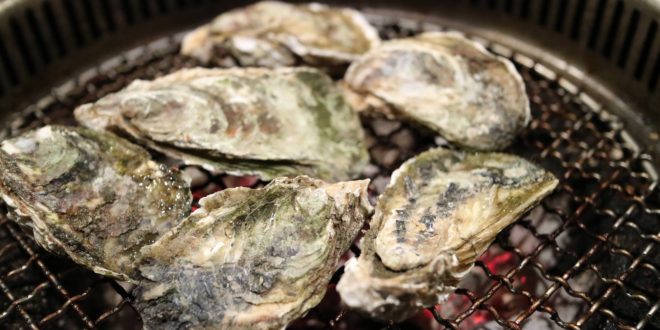 There is something about this time of year that makes me think of oysters. Oysters are one of those enigmatic foods you either love or hate. Seems like people find the oyster beautiful and tasty, or ugly and disgusting. I suspect the first person who ate an oyster was both brave and very hungry. Of course, all mollusks are edible, even if not appetizing to every palate.

However, when they are fat and happy, say along about late November or December, they are the sweetest and juiciest. This is due to the buildup of a couple of chemical compounds: glycogen and glycine. Glycogen is a long chain of glucose molecules (think sugar) and glycine is an amino acid that tastes sweet to our taste buds.

Oysters are very effective filter feeders and remove a great deal of material from the water. For this reason, they have come to symbolize clean, healthy water. It is most appropriate for the St. Johns Riverkeeper to have an oyster roast as a fundraiser. Regretfully, we cannot currently harvest oysters from Duval County waters.

Some of my fondest memories of the fall come from family oyster roasts. We had an outdoor brick fireplace with a grill that we could replace with a steel plate. Early in the afternoon, we would build a fire in the pit and let it burn down to a very hot bed of coals. As kids, we knew we were gaining status when we were allowed to add wood to the pit. This process would take hours and involved a lot of standing around, talking and playing catch with the inevitable football that was always present. If I had a dollar for every time my mother or aunt would yell, “Boys, watch out for the fire!” I might be rich.

Finally, the oysters would be spread on the steel plate and covered with a burlap sack. Some water might be poured on them, creating a sizzling mist of steam. After a few minutes, folks would gather round a picnic table covered in newspapers with shovels full of oysters dumped in the middle.

The most prized place to eat your oysters was right from the grill. As they were shoveled from the grill to the table, the pile would be pushed forward, where the senior-most people would get their oysters and shuck them right by the fire. You could pick how “done” you wanted your oyster by where in the grill you took it. The further back, the more raw or less cooked the oyster would be. It was a science to get the oyster from exactly the right spot, with the precise degree of steaming you wanted.

And you knew you had really arrived when you finally got your place at the grill.

How do I get involved with the current effort surrounding access and usage of the St. Johns River?

Thank you for your interest and support of the river. First, go to jaxboatplan.com to find more information about the plan and to take our new survey. Then, a public open house on waterways in Duval County will take place on Tuesday, Dec. 6, at South Beach Park Community Center. The Community Center is at 2508 S. Beach Parkway behind Fire Station No. 2, next to South Beach Park on Osceola Avenue. All are invited. We welcome your ideas and comments.