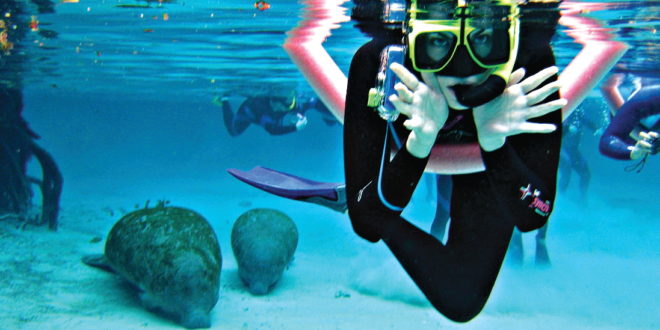 Diana Donovan, then a senior and now JU Director of the Office of the President, on a student activities manatee encounter in 2010.

Last month, our local charismatic megafauna, the Florida manatee, achieved a very significant milestone in recovering from near extinction, when the federal government down-listed the marine mammal from endangered to threatened.

While some are upset that the status of the gentle giant was changed, it really is something to be celebrated. To continue to be listed as endangered, the manatee had to be in imminent danger of extinction. We deserve a collective congratulatory pat on the back for this recovery. It can join the list of animals like eagles, ospreys, redfish and alligators that have seen significant populations rebound after human activities affected their numbers.

The manatee is a large, aquatic mammal that has been part of the Florida ecology for thousands of years. There are actually two subspecies of what we call the West Indian manatee: the Antillean manatee (Trichechus manatus manatus), and the Florida manatee (Trichechus manatus latirostris). Manatees have been called by their nickname “sea cows” because they eat seagrasses and other aquatic plants. They look a little like aquatic cows as they graze on various aquatic vegetation. They have also supposedly been mistaken for mermaids, a connection I never have fully appreciated.

Manatees continue to be protected under the Endangered Species Act and under the Marine Mammal Protection Act. And down-listing their status will not reduce the level of protection afforded this lovable mythical mermaid.

Today, the total population of all manatees throughout their entire range is estimated to be at least 13,000 animals. More than 6,500 are in the Southeast and in Puerto Rico. In 1991, there were an estimated 1,267 manatees reported during the first aerial surveys in Florida. Today we see more than 6,300 in Florida.

This represents a significant increase over the past 25 years. I did a video interview about 30 years ago in which I predicted that the manatee would be extinct in our lifetime. They were dying faster than they were being born, so the math was pretty simple. Thankfully, I was wrong.

What I did not appreciate at the time was how much people would rally to save the manatee. I can honestly say that I have never met anyone who wanted to hurt a manatee. This is despite the fact that people hunted manatees for food into the ’40s and ’50s. But that was a long time ago, during a different mindset of what was accepted and allowed. Most people are careful and respectful of these slow-moving animals.

All the more reason to celebrate one when it is sighted swimming by.

How much has the drought we are experiencing affected the St. Johns River?

Northeast Florida is experiencing what is termed an abnormally dry period, while the area south of us is in a severe drought. Here in this area, we are well over a foot below normal rainfall over the last year. This has resulted in higher-than-normal salinities in the river. You don’t see much difference, but it means that more salt water-tolerant species are moving south, while fresh water species that cannot move, such as cypress and submerged aquatic species, are dying because of the higher salt content. This will have significant environmental impact if normal rainfall patterns don’t return soon.