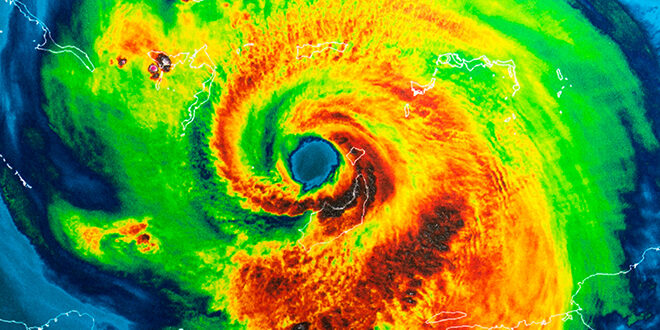 Geocolor Image in the eye of Hurricane Irma. Elements of this image furnished by NASA.

Hurricane season is here. And it looks to be much like last year. The National Oceanic and Atmospheric Administration has predicted, with a 70 percent confidence level, that we will see 13 to 20 named storms with winds reaching 39 mph or higher. Maybe six to 10 could become hurricanes, which have winds of 74 mph or higher. And of those, three to five may be major hurricanes with winds exceeding 111 mph. Now is the time to prepare and take advantage of the hurricane supplies tax-free days that last until Sunday, June 6th.

Scientists use the Saffir-Simpson Hurricane Wind Scale of 1 to 5 to classify storms according to their maximum sustained wind speed. Suffice it to say that our level of concern rises with the number. But also realize that even a category 1 storm can cause death and destruction depending on where you are relative to water and exposure to the wind. So, it is good to prepare and pay attention to the forecast.

Meteorologists have done an amazing job of analyzing past hurricanes to predict where they will go and what kind of wind speed we can expect, but as everyone knows and usually complains about, it is not the accuracy, but the inaccuracies of the forecast that get our attention. There is a limit to what we know and also no limit to what we do not know. We are still in the very early years of developing weather science.

We have come so far in the development and use of technology. However, I am afraid we also suffer from what I have called “CSI Syndrome.” On that show, very complex crimes get solved in under an hour using advanced instrumentation that borders on science fiction, and we expect — even demand — perfection.

Those of us born before about 1981 lived in a world that did not even have desktop computers, much less cell phones, ATMs, and on-demand weather radar. How far we have come!

The first weather satellite was designed by the Radio Corporation of America and launched by NASA in 1960. That first satellite, the Television InfraRed Observational Satellite — TIROS 1, only survived in space for 78 days. but it demonstrated the feasibility of monitoring Earth’s weather patterns from afar.

Today there are multiple satellites, some in orbit, and some almost stationary relative to their position on Earth. Plus, we have hundreds of ground-based radar units gathering information on rain, clouds, wind speed and direction. We gather literally thousands of weather data points every hour, maybe every minute.

All this data goes into massive computer programs that analyze and model what has happened in the past, so that we can predict what might happen in the future. One big limitation is how far we can see into that future. Right now, it is about 3 days, but even that can vary. The world’s weather system is extremely complex.

Fortunately, we are getting better and better at understanding what is happening and when it might happen. While today NOAA may feel that it is 70 percent accurate in forecasting hurricanes, that percentage will climb with time.

My family used to vacation on the Outer Banks of North Carolina, and we often visited the dunes at Kill Devil Hills and the Wright Brothers National Memorial. My father used to talk about being born in 1910, just seven years after the first flight, and then seeing a man step on the moon. He marveled at the progress.

Likewise, when I look back at my career and see how technology has advanced, it is truly mind-boggling. It is exciting to imagine how our ability to measure, analyze and understand some of the complex environmental interactions, like the destructive giant harmful algae blooms, will be so much improved that we will also marvel at why we did not understand how to control them earlier.

Glad you asked River Life.
Do marine scientists oppose fishing and people who fish?
Quite the contrary, most of the marine scientists I know like to fish, eat fish and are very supportive of local men and women who fish, but it is not hard to see how this question would come up. Any fishing regulation that sets catch limits or size is going to somehow go back to the work of a fisheries scientist. Some marine biologists are opposed to fishing, just like there are members of the general public opposed to hunting and fishing. Marine scientists and people who fish have the same goals. Everyone wants a healthy, productive ocean. In many ways, the way we both work and play depends on a heathy estuary and ocean ecosystem. Unfortunately, overfishing is one of the biggest problems facing the ocean today. We have the technology and ability to catch almost every fish in the sea. Some conflicts are unavoidable, and we are going to disagree on important issues, but in the end, we all want the same thing. So just like speed limits and traffic lights, some regulations are necessary to keep everything working smoothly.