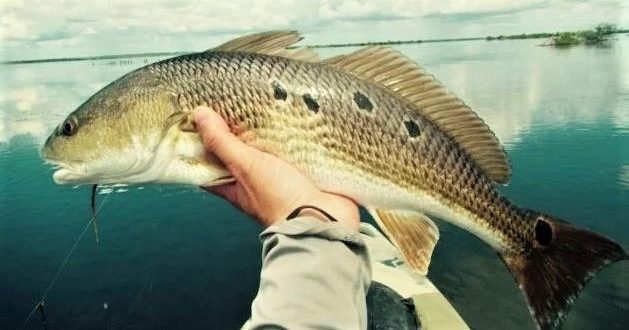 One of the most popular game fish in Northeast Florida is locally sometimes called red drum, redfish, or simply reds. I say locally and sometimes because the species goes by many other names depending on where you are and who is talking.

I grew up in Norfolk, Va., where we called them puppy drum or channel bass. The drum name I understand because they are closely related to black drum, and another one of their names is red drum. As a drum species, they make a croaking or drumming sound with their swim bladders when they are distressed or mating. I’m not sure about the name channel bass since they look nothing like a bass and can grow much larger.

Red drum get their common name from their dark red, often reddish- bronze color. They can grow to over 90 pounds with the Florida record just over 52 pounds. They should not be confused with red snapper, which is a totally different species.

Their most distinguishing mark is a large spot near their tail. Hence, the origin of their sixth name: spottail bass. While many will have the single spot near the tail, others will have multiple spots all over their bodies. This, in turn, leads to fishing tournaments where the winner is the fish with the most spots.

In case you have lost count, the six names given this species are red drum, redfish, reds, puppy drum, channel bass and spottail bass or just spottail to add to the confusion. This is a reason scientists have one scientific name for every species. Sciaenops ocellatus is the scientific name given this particular fish with the genus name Sciaenops indicating large edible fish with the species ocellatus meaning eyespot, referring to the spot on the tail which resembles an eye.

In the 1980s, New Orleans chef Paul Prudhomme created Cajun-style blackened redfish, which became extremely popular. Consumption of redfish soared. While this single fact probably did not tremendously impact the redfish population, it did call attention to how much we did not know about redfish biology. Overfishing and habitat destruction in the ‘60s and ‘70s had led to a population decline. Quite honestly, the population assessment data was very weak. It was about this time that the Coastal Conservation Association became active in redfish conservation and began to lobby state and federal agencies to place a moratorium on harvesting redfish until scientists could decipher their life history.

Scientists rather quickly discovered that the largest fish were females. And if you want the population to recover and thrive, you need to protect the breeding females. That, in turn, caused both state and federal agencies to limit the number of fish taken and to also regulate the size of the fish that you are allowed to keep. You cannot keep fish smaller than 17 inches in length or longer than 27 inches. And within this slot, you can only keep two fish per person. There is a one-fish limit in some areas, but here in Northeast Florida you can keep two.

Redfish are a hardy species that lends itself to catch and release. This has allowed people to enter redfish tournaments, hold their fish in an aerated cooler, weigh or count the spots and release the fish alive back into the water. Thus, we now have a robust and healthy population of redfish to enjoy. Catch and release has gained wide-spread acceptance among recreational fishermen and women for all species. The redfish is a success story of conservation and common sense where we linked good science with conscientious fishing where everyone won.

As a marine biologist, what do you do every day?

One thing I especially like about being a marine biologist is that every day is different. I might be teaching a class on the St. Johns River one day, out on a boat in the river gathering data on another day, or at the beach on a field trip. I might be meeting with a group concerned about a particular problem with the river then working with a governmental regulatory agency to see if we can solve the problem. But I also spend a lot of time reading, writing and thinking about what to do next.

River Life runs the first Tuesday of each month in The Florida Times-Union. E-mail  Quinton White, executive director of Jacksonville University’s Marine Science Research Institute, with questions about our waterways at qwhite@ju.edu. For more on the MSRI, visit ju.edu/msri.