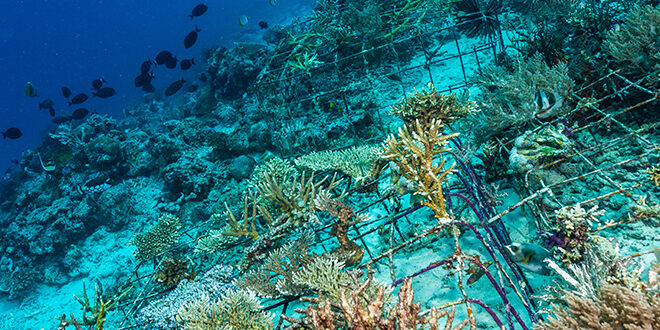 The term artificial is a misnomer. The name artificial comes from the fact that people establish these reefs by placing non-natural materials like concrete or old ships on the sea or river bottom. These surfaces allow for plant and animal life to grow and become reefs that attract fish and other marine life. A similar process occurs in freshwater lakes where people place bush and tree limbs near their docks to attract fish. All of the life that grows on the reefs is 100 percent natural.

In addition to the biological importance of the artificial reef, there is the socioeconomic value that they provide for local citizens. Results from the angler surveys can be used providing a tangible measurement of the economic value of reefs so decision makers and lawmakers  may improve future artificial reef planning and development along Florida’s coasts, expanding into riverine systems.

Jacksonville University’s Marine Science Research Institute, with the help of the Jacksonville Sheriff’s Office Dive Team and the Florida Fish and Wildlife Dive Team, was able to study the growth of benthic organisms on the reefs. We were also able to fish the reefs and to interview anglers at nearby boat ramps.

The project to monitor the St. Johns River Reefs turned out to be even more challenging than expected.  On Sept. 11, 2017, Hurricane Irma struck Jacksonville with massive rainfall over the entire state. The amount of freshwater input into the St. Johns River impacted the salinity and changed the nature of the estuarine lower basin where the river reefs are located to more freshwater habitat. Hurricane Irma effectively killed the marine organisms and altered the reef for the rest of the project.

In many ways, our research shifted from the growth and progression of a river reef to one where we followed the recovery of a reef system from a hurricane. All in all, it was a very interesting process. The bottom line is that the reefs are a productive addition to the river ecosystem and offer not only fishing opportunities for local anglers, but also contribute to improving the overall ecology of the St. Johns River.

Glad You Asked River Life
Why are so many manatees dying this year?

Regretfully, we are experiencing what could be near record numbers of manatee deaths this year. As of March 26, 2021, 537 manatee deaths had been recorded. In 2020, a total of 573 manatees were reported. The largest number are in Brevard County with 248, compared to 2020 when they had 173 all year. The exact cause is unknown, but it is suspected that they are starving. Poor water quality has reduced the amount of submerged aquatic vegetation that manatees rely on for food. The is especially discouraging since we  had seen an increase in the overall population of manatees over the last few decades.