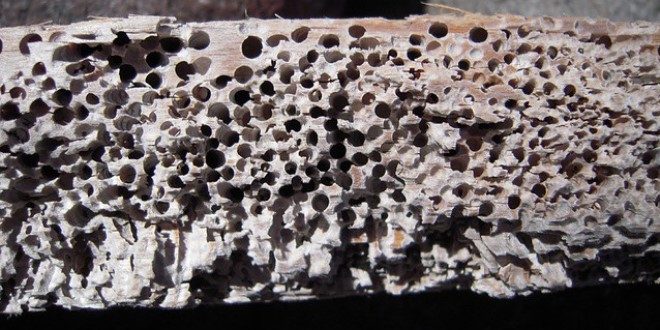 Boring is not a description normally associated with river or ocean life — at least not if the definition used means dull and uninteresting. But boring is the topic for this column — not in the unexciting way but in the drilling and making holes in things kind of boring.

Homonyms or words that sound alike but mean different things are one of the characteristics of the English language that can drive you crazy. So, let’s bore into this topic.

Some animals that bore holes into things have appropriate names like oyster drill. The oyster drill, just as the name implies, is a small snail that makes its living creating holes in oyster shells.

It has a tongue-like organ with a rasping surface called a radula that it uses to repeatedly lick the same area of a shell, gradually drilling a small hole. The oyster drill will then inject digestive fluids into the oyster that kills it, allowing the shells to open so the snail can crawl inside and feast on the succulent flesh. Other animals, fish and crabs also benefit from this now available meal.

Other snails also have to ability to drill into shells. Take a walk along any beach collecting shells, and you will easily find many with perfectly round holes in the umbo, which is the oldest and central part of the shell. It is almost like someone drilled a hole just so you can string the shell on a necklace.

Some animals look nothing like what they really are, such as the shipworm. Many people recognize the holes and destruction of wooden structures, like ship hulls and pilings, caused by these worm-like creatures. But the shipworm is actually a bivalve related to clams and oysters.

It uses its rudimentary shells like a file that it grinds into wood to create the tube-like network throughout the wooden material. It is only when you study the shipworm’s life history that you find the molluscan larval stages that reveal who it really is.

But perhaps the most intriguing organisms that create multiple holes in another animal, or its remains, is the boring sponge. Sponges are among the simplest of animals with no brain or nervous system, no digestive organs and no heart or circulatory system.

However, they can secrete chemicals that dissolve the calcium carbonate of shells and create a network of holes in a wide variety of shells or corals. On your beach walk, look for large shells that are riddled with hundreds if not thousands, of holes, and you are seeing the handiwork of boring sponges.

But like I said, boring does not mean dull and uninteresting.

Do you enjoy working with dolphins, whales and sharks?

I get that question often when I speak to students who are interested in marine science or marine biology careers. And the honest answer is a somewhat qualified, “Yes, but …!”

The “but” comes with the reality check that the river and ocean are huge and so are the variety of marine organisms that we are able to study. And while these charismatic megafaunas are fascinating, so are the literally millions of other possible topics that need to be studied. I always encourage students to maintain an open mind to the wide variety of topics possible in the marine world.