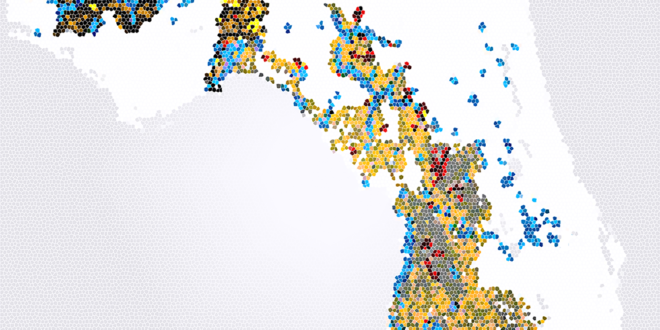 The academic world’s rapid response to the rise of data as a dynamic factor guiding society’s progress means cultivating skills in two areas: How to analyze it, and how to guard it.

Two leading-edge programs in the College of Arts and Sciences are designed to prepare students for the job market with the skills necessary to achieve in those areas.

A Cybersecurity major began last fall, closely following on the heels of a Geographic Information Systems (GIS) minor. Both of the technology-driven programs emphasize real-world applications and are designed to be responsive to the market as employer demands quickly shift in these areas.

In GIS, voluminous amounts of data are linked to locations, and the various components are then correlated, often to determine combinations of factors that are important – for example, the spread of disease might be analyzed along with areas’ levels of education, or students might map traffic accidents in Duval County, or create an event map of all the Starbucks near JU, or map election results by census blocks, or even create a model of black duck habitat loss due to sea level rise.

“It is one tool for dealing with large data sets, and we know that big data, and the analysis of big data, is a growth field in terms of employment opportunities,” said Dr. Lee Ann Clements, Associate Provost for Assessment & Academic Operations.

The Cybersecurity field, meanwhile, is contending with a mad dash of sorts from employers seeking experts. The field offers many employment opportunities and is closely related to GIS with regard to technology and big data. More companies and organizations are using cloud-based applications, which are beneficial for storing a lot of data, but that also poses a threat for security of the information.

“The ability to keep data safe from criminals, spies and other nefarious interests is important for business, government, healthcare and education,” Dr. Clements said.

Both programs at JU feature faculty with expertise in practical applications and scholarly endeavors, who can keep abreast of changes in their fields, offer hands-on training in the use of these new technology tools, and produce the best combination of theory and practice for JU students.

When did planning start to establish the Cybersecurity degree and GIS minor?

Acker: Work began on the Cybersecurity degree back in 2013-14 . Faculty in the Computing Science Department recognized the need to establish the degree, based on what was happening in the industry and student interest.

Johnson: We started working on the GIS minor in the fall of 2014. Geography Professor Ray Oldakowski saw the value in creating a minor in GIS, and I had expertise in the subject matter, so it was a departmental effort and designed to also respond to demand in the STEM fields.

How many students are enrolled in these programs?

Acker: We have several now majoring in Cybersecurity, and there are quite a few students planning to take Cybersecurity courses. In fact, the Registrar’s office reports that seven students have already declared Cybersecurity as their major. We expect this number to increase steadily.

Johnson: We have about eight students pursuing the GIS minor, and they come from a diverse background: Sustainability, Marine Science, Geography, Computing Science, Engineering and more.

Casey, why did you decide to pick the GIS minor?

It is the field that I eventually want to get a job in. I’ve always been a computer person, so combining it with my love for geography only helped cement my decision. I had only first heard about what GIS even is when I started going to JU. After taking the first GIS class, I knew it was something I wanted to pursue.

So you feel the GIS minor will help prepare you for the job market?

I feel like every single class I have taken for this minor (both of the GIS classes and two Computing Science classes) has given me skills that are desirable and sought out in the job market. Just the fact that we learned to use the ArcGIS program gives a boost, since that is the most-used program in the field.

Can you tell us more about the ArcGIS software, Professor Johnson?

It’s the industry standard to create maps and compile geographic data. It lets you use contextual tools for mapping and spatial reasoning to get location-based insights. You can see where things happen faster, and connect the dots with the data. Funds from JU’s Florida EPIC (Entrepreneurism, Policy, Innovation, and Commerce) Program were used to purchase a site license for ESRI’s ArcGIS software program that we use in our GIS courses. It’s the go-to software being used, and it’s a big deal to have it because in the past we’ve only had a lab pack, and that limited our ability to use a lot of the software’s online functionality.

Vanessa, what initially attracted you to the Cybersecurity bachelor’s degree?

It is gaining traction in today’s world, especially with it being front and center in current events. Being a new field only makes me more excited to be going into it. I wanted to pursue the major because of these challenges I know I will face, especially as a female in the field, and I look forward to overcoming them. It is a field that is always evolving, as new discoveries in technology create new problems to solve… In recent years, there has been an influx of career opportunities for cybersecurity specialists. The positions and opportunities available only continue to grow. I think introducing Cybersecurity speaks of Jacksonville University’s ability to remain diverse and keep up with a changing society.

What types of jobs will students with training in these areas obtain, and what will be their typical duties?

Acker: The Cybersecurity major is designed to prepare students with a strong background of computer networks and the best practices to protect information transfer and storage. Graduates are trained to work as network administrators, penetration testers, digital forensics analysts and network security analysts. Average salaries were around $91,210 in 2015, according to U.S. News and World Report.

Johnson: According to the Bureau of Labor Statistics, the projected percent change in employment from 2014 to 2024 for GIS analysts is 29 percent, compared to the average for all occupations of 7 percent. There are lots of different job opportunities out there, taking place in a variety of industries, such as performance measurement analysts, GIS research associate, GIS editor, remote sensing specialist and more. Starting annual salary for someone with a bachelor’s is around $60,000.

What is an example of a project you’ve been involved with, Casey?

During our advanced GIS course, we were required to come up with our own project topic, create a poster and present our findings at the 2016 Undergraduate Research Symposium. I did my project on the vulnerability of the Floridan Aquifer to groundwater intrusion. I had to collect a lot of GIS data online about bedrock types throughout Florida, sinkhole locations, open springs, etc. In the end, I was able to compile all of the data I found and create different maps showing where the Floridan Aquifer is at its most vulnerable.

And after it was all finished, I realized how much fun I had collecting the data and piecing it together to tell the story that I wanted.