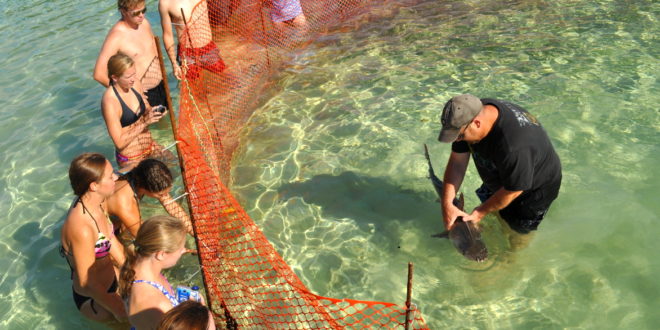 He’s one of the great shark researchers and taggers, and now Jacksonville University has tracked him down to teach marine science and combine his student-centric efforts with the University’s new partner, world-renowned shark collaborative OCEARCH.

Dr. Bryan Franks starts in mid-August as an Assistant Professor of Biology and Marine Science in the College of Arts and Sciences, after stints including Marine Biology Program Coordinator at Florida Southern College and Managing Director for the Bimini Biological Field Station in the Bahamas.

“We had an outstanding pool of applicants, and he was the consensus pick among our selection committee,” said JU Marine Science Research Institute Director Dr. Quinton White. “With his background in Bimini and his teaching and research qualifications, he brings a high level of maturity and experience to our program.”

Dr. Franks will begin teaching an introductory course in oceanography and will develop a graduate course in coastal and ocean observing systems that includes usage of shark tagging, satellites to predict weather, ocean drifters and more.

Eventually he will embark with students on the M/V OCEARCH research vessel, which is now home-ported in Jacksonville. Dr. Franks will meet with world-renowned OCEARCH founder Chris Fischer and other OCEARCH staff members, with the expectation to be on board with students by next spring.

“OCEARCH at Jacksonville University,” a collaboration announced in February, puts the University and its namesake city on the world stage for marine science learning. It also provides one of the global leaders in ocean species research a premier academic home with resources to expand for years to come.

OCEARCH, an internationally recognized at-sea laboratory with millions of social media followers and dedicated to studying keystone marine species like great white and tiger sharks, is expected to magnify opportunities for students of JU marine sciences and other programs. It is the largest shark collaborative in the world.

For Dr. Franks, the opportunity to work with undergraduate and graduate students, the MSRI faculty, OCEARCH staff and scientists arriving from locations across the globe to further their research was too good to pass up. 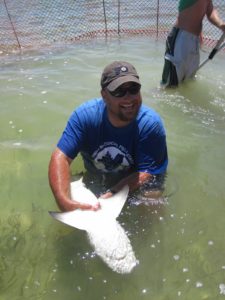 “For students, the advantage is that the techniques learned in shark ecology are hugely relevant no matter what field you end up in,” he said. “If we are on the OCEARCH vessel putting satellite transmitters on sharks, or doing surgery to implant transmitters for acoustic passive telemetry, or taking blood samples to look at isotopes to evaluate diet, that’s going to be an incredible experience.”

He was also attracted to JU’s focus on outreach.

“That’s important, because sharks are still seen today by many as mindless killers, and the public perception is not on par with manatees or dolphins. That hinders conservation efforts,” Dr. Franks said. “So seeing that JU and OCEARCH both are getting more involved in educating school-aged students was important to me.”

Among his many awards for shark research are major grants from the SeaWorld & Busch Gardens Conservation Fund, The National Geographic Society Committee for Research and Exploration, The Henry Foundation, The Pew Foundation and The Institute for Ocean Conservation Science.

Dr. Franks cut his teeth studying shark biology while doing doctoral research in Bimini, Bahamas, and later served as managing director of the field station in Bimini overseeing shark research at the station. He later taught at Rollins College and then Florida Southern College.

“We have graduate students here now who know him from Florida Southern and Bimini, and they rave about how student-friendly he is,” said Dr. White. “He’s very focused on the students, and he also immediately started talking about getting involved in community outreach and taking students on trips. He will add an aspect to our program that we need, and his background in shark biology and tagging fits exactly into our current staffing needs.”