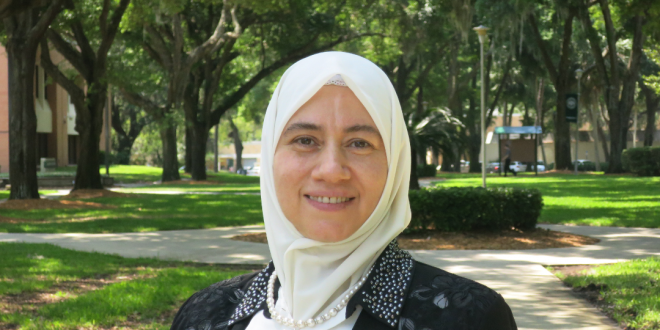 Dr. Tabbaa has collaborated with Dr. Christine Sapienza, Dean of the Brooks Rehabilitation College of Healthcare Sciences; Dr. Mark Alarbi, Academic Program Director of Orthodontics; Dr. Leigh Hart, Assistant Dean of Faculty Development and Curriculum for the College of Healthcare Sciences; and the Orthodontic faculty to develop an Orthodontic MS track using an interdisciplinary model within BRCHS. She now joins the team in a full-time capacity.

She has already hit the ground running by reviewing students’ manuscripts and participating in the organization of this June’s Orthodontic Research Symposium, at which residents presented their final-year Capstone research projects. In addition, Dr. Tabbaa brings a recently awarded research contract from You First Services Inc. for her project, “Clinical Evaluation of the Efficacy of an Intra-Oral Spray for Invisalign Patients.” Healthcare Sciences Dean Dr. Christine Sapienza will serve as a Co-Investigator on this research contract.

Dr. Tabbaa also holds an appointment as a Professor Emeritus from the State University of New York at Buffalo’s School of Dental Medicine. She previously served as a full-time Clinical Assistant Professor and Research Program Director in the SUNY at Buffalo Department of Orthodontics.

Dr. Tabbaa was born and raised in Damascus, Syria, and came to the United States in 1991. She received her DDS from Damascus University School of Dental Medicine in 1983, where she graduated first in a class of 284 students, and she received her Certificate of Specialty in Orthodontics from the same University in 1986. Dr. Tabbaa received a specialty certificate in Tempromandibular Disorder & Orofacial Pain, earned a Master of Oral Science Degree from the University of Buffalo in 1997 and earned another Orthodontic Certificate of Specialty in 2004. She is a Diplomate of the American Board of Orthodontics (ABO).

She has earned several outstanding awards in recognition of her abilities as a researcher, educator and caring clinician. These include the Sigma Xi Research Award, Excellence in Teaching Award from University at Buffalo, The Research and Public Service Award from North Eastern Society of Orthodontics, Faculty Fellowship Development Award from the American Association of Orthodontics Foundation, Best Treated Case Award, and a Community Service Award from Muslim Public Affair Council.

A study led by Dr. Tabbaa and published in the prestigious Journal of Clinical Orthodontics titled “Midline Diastema Caused by Tongue Piercing,” which showed how people with tongue piercings risk developing gaps between their front teeth from playing with the stud, generated a great deal of international interest in mainstream media such as USA Today, The Wall Street Journal, BBC News and the Los Angeles Times.

An active member of the Islamic Society of Niagara Frontier, she was president of the weekend Islamic school. She has been invited to lectures in schools, universities, colleges, churches, synagogues and study clubs throughout Western New York, alongside lecturing internationally.