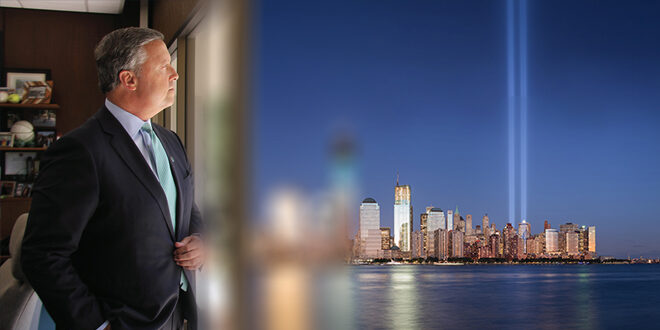 By all accounts, it was a beautiful day. The sun was shining, the air crisp, as Jacksonville University President Tim Cost, then an executive at Bristol Myers Squibb, finished a two-and-a-half-hour commute from Philadelphia to New York City. He took the 5:00 a.m. train each morning and returned home at 8:00 p.m. each night.

On this particular day, he had an 8:30 a.m. meeting with two bankers whose offices were in the World Trade Center. Without giving it a second thought, he had moved that meeting to his office on the top floor of a high-rise in Midtown Manhattan.

“At 4:30 p.m. that Monday, September 10, I was checking my calendar, and I saw the meeting for the next morning, and I said to my assistant, ‘Since when does the client go to the bankers, especially first thing in the morning?’ The World Trade Center is a zoo at that time. There are thousands of people pouring in from New Jersey and New York, so I asked her to move the meeting to our offices.”

The bankers arrived in good spirits, chiding Cost for changing the plan. They assembled around the conference table in his office, a TV tuned to CNBC on the wall.

“I was sitting facing the TV, and the screen flashed to an image of the World Trade Center and there was a little stream of smoke coming out of the north tower, and they were running a banner that said that a small or private airplane had hit the tower. We all said, ‘Wow, some poor guy really ran off course.’ We thought it was a fluke.”

The men continued their meeting, keeping an eye on the developing story. Seventeen minutes later, American Airlines flight 75 out of Boston entered the screen.

“It’s coming right at the south tower, which is the building where the two gentlemen sitting with me work, where we were all supposed to be. And it angled itself, so it could hit as many floors as possible.”

This time the impact was caught live on camera.

“You’re literally watching the murder of your friends. I mean, I knew hundreds and hundreds of people in those two towers.”

Cost stepped into the corridor to find business as usual. Phones ringing, fingers typing, conversations occurring as they normally would.

Technology was different then. iPhones were nonexistent. Word processors were still commonplace. Email and texting were not as pervasive, news not as instantaneous, and social media was in its infancy.

“The World Trade Center was only 20 blocks away, but the wind was blowing in the other direction, so if you looked out the window over Midtown Manhattan, it was gorgeous. There was no smoke. There was nothing.”

In quick succession, Cost and several other executives were shuttled through a series of meetings. Charles A. Heimbold Jr., then CEO of Bristol Meyers Squibb, delivered several immediate directives. The Justice Department, CIA and FBI informed the top corporations in New York City, all of which were located in tall towers,  that the government could not provide full protection. Intelligence warned that there may be more planes in the air and that there could be bombs in all the subways and under the major bridges of Manhattan.

America was at war, and yet, most of the people in the building knew nothing about the events unfolding just a short distance away.

A judgment call would have to be made.

“Those events formed one of my own tenets of decision making, which is that there are rarely clear and obvious solutions. There are only trade-offs. Do we evacuate the building and send people home, possibly into the very trains and subways and bridges where they could die? Or do we keep them in the building where they might be in grave danger?”

The building was emptied. Workers poured into the streets by the thousands.

At 10:03 a.m., a plane bound for the U.S. Capitol was downed in a rural field where the only lives lost were those of the courageous passengers who overpowered the hijackers.

“Phone service was out, and I couldn’t call my wife or my kids, who were 12 and 15, and who had learned from their teachers at school that there was a problem in New York where they knew their dad worked.”

Cost would eventually reach his wife, Stephanie, but only briefly as F-16 bombers flew routes between skyscrapers, rattling offices as they guarded a city that was now a war zone.

At 2:00 p.m., he connected with a colleague who also commuted from Philadelphia, and another decision would have to be made. The city was shut down. There was no place to go. Do they sleep in their offices or try to get home?

With the earlier warnings of U.S. intelligence officials running through their minds, they walked to Penn Station, the busiest transportation facility in the Western Hemisphere. It was deserted. Every train on the big board, normally ticking with activity, cancelled. A lone red cap, a railway employee who assists passengers, happened to walk by and asked where they were headed.

“I’ll never forget this. He turned, and he said, ‘If you go to stairwell 6A in five minutes, there’s a train deadheading back, and you can get on it.’

“So now I’m left with one more decision which was whether to board a train which may or may not emerge from the tunnel.”

The train pulled up, just like it was supposed to. It left the station, like it normally would. It exited from underneath the island of Manhattan with just two passengers onboard. Both turned back to stare at a skyline forever altered, at a World Trade Center complex where two mighty towers once stood.

“They came down in about an hour and half. The smoke was still rising.”

More than 2,700 lives were lost as a result of the September 11 attacks. The days and weeks and months that followed were a blur of memorial services and self-reflection.

“It was a time to think outside yourself, about your ability to bring people together and give them confidence and help them move forward. That’s what leadership is. That’s what inspires persistence and optimism and respect and teamwork. I talk a lot about those qualities, and most people probably assume that stems from my years with major corporations, but that’s not entirely true. It also stems from that day and from the aftermath of 9/11.”