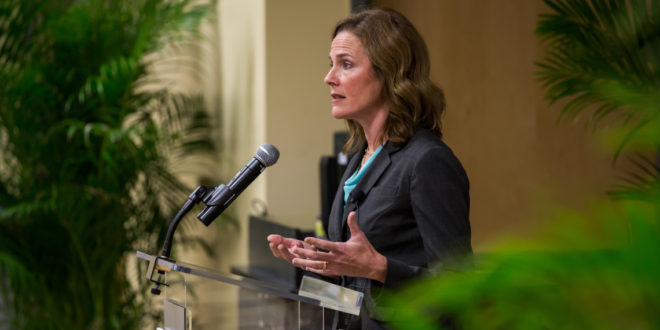 Her visit to the Jacksonville University Public Policy Institute last fall drew a crowd, as area voters prepared to cast their ballots in the 2016 presidential election and at a time when the future of the Supreme Court was a hotly debated topic nationally. One year later almost to the day, Judge Amy Coney Barrett was confirmed to the Seventh Circuit Court of Appeals.

Then-Professor Barrett accepted an invitation to address JU public policy students through the Institute’s annual Hesburgh Lecture, a series of talks by experts from the University of Notre Dame and in collaboration with the Notre Dame Club of Greater Jacksonville. Past VIP keynotes have included Notre Dame Professors Thomas A. Gresik, Michael Pries, Dr. Richard Jensen, and Political Science Professor Dr. Michael C. Desch is up next, at the end of this month.

Last November, the prospect of America’s next president having the opportunity to influence the leanings of higher courts for decades to come was of great interest and continues to spur concerns today well after the Neil Gorsuch confirmation and as an entire slate of federal judges nominated by President Donald Trump are considered by the U.S. Senate.

With Scalia’s empty seat now filled and three other Supreme Court Justices between the ages of 79 and 83, discussions continue about the nuances of the highest court. However, when it comes to presidential influence over judicial appointments, federal appeals court judges, who preside over more than 30,000 cases per year, have proven as much a concern as Supreme Court justices, who hear roughly 70 cases annually.

Other than Gorsuch, no other nominee has yet inspired as explosive a reaction on the Senate floor as did Barrett. A 176-day filibuster attempt delayed Barrett’s confirmation, but ultimately ended in a 55-43 affirmative vote. During the long and arduous hearings process, there was no shortage of news to report as Article Six, Section Three of the U.S. Constitution took center stage.

“No religious test shall ever be required as qualification to any office or public trust under the United States,” the Constitution states, and more than one voice spoke in defense of Barrett, as Senators Dianne Feinstein, Dick Durbin, and others closely questioned her on matters of faith. Feinstein’s line of questioning has since been criticized by some Catholic and non-Catholic pundits, scholars and constitutional experts, and her phrase “the dogma lives loudly within you” repeated in a media frenzy across the country. 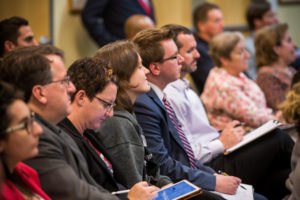 Among those casting “yes” votes on Oct. 31 were three Democrats–Senators Tim Kaine, Joe Manchin and Joe Donnelly, a Notre Dame alumni. Arizona Senator Jeff Flake, open about his Mormon faith, was one of several Republicans—Senate Majority Leader Mitch McConnell and Senate Judiciary Chairman Chuck Grassley—who spoke in favor of Barrett on the Senate floor. He said, “It is religious liberty that is threatened when we seem to evaluate the fitness of nominees for high office on religious orthodoxy. While it’s remarkable that I need to say this in 2017, it bears repeating: A Roman Catholic can be a faithful steward of the law. So, can an Episcopalian, so can a Mormon, so can a Muslim, or so can an atheist.”

Barrett met questioning about her Roman Catholic ties with the statement that “if there is ever a conflict between a judge’s personal conviction and that judge’s duty under the rule of law, it is never, ever permissible for that judge to follow their personal convictions in the decisions of the case rather than what the law requires.”

While the spotlight has since shifted to other nominees undergoing Senate hearings, Barrett has remained in the forefront of supporters’ minds as some hint at her potential for a future opening on the Supreme Court. She is also remembered and fondly regarded as a past lecturer at the Jacksonville University Public Policy Institute.

The Institute is preparing for the 2017 Annual Hesburgh Lecture and welcomes Dr. Michael C. Desch, Professor of Political Science at Notre Dame and this year’s keynote speaker, at 7 p.m. Nov. 30, in the Davis College of Business. Sought as a top expert on American foreign policy, Desch will outline the challenges and opportunities the U.S. faces as it tackles the issue of ensuring national security in the years to come considering new threats and technologies. After the lecture, which is free to the public, a moderated discussion will be held, inviting questions from the audience, a group largely made up of graduate students of public policy. 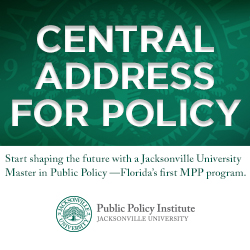 For more information on the Fifth Annual Hesburgh Lecture Series or the Jacksonville University Public Policy Institute (PPI), visit the Institute’s webpage, or contact Fowler Martens at (904) 256-7053, or fmarten@ju.edu.