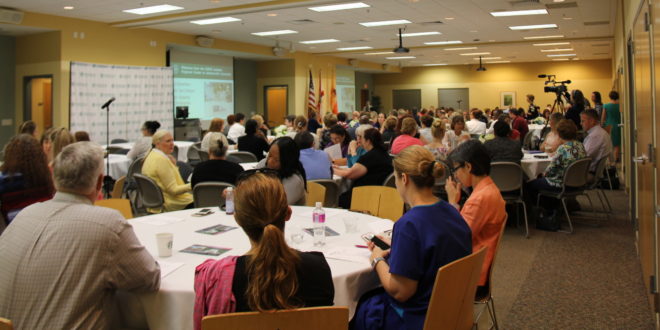 Healthcare professionals from across the region packed the DCOB conference rooms for the inaugural Patient Safety Forum hosted by the newly launched Quality and Safety Education for Nurses (QSEN) Institute Regional Center at Jacksonville University.

The call to action came in 1999, when the Institute of Medicine issued its “To Err Is Human” report estimating that as many as 98,000 people were dying annually from preventable medical errors. Urged on by an alarmed public, the health care system implemented procedures, policies and training to improve patient safety.

But almost two decades after the findings were announced by the non-profit institute, now renamed the National Academy of Medicine, the numbers aren’t appreciably better. Preventable medical errors are the third-leading cause of death in the U.S., behind heart disease and cancer. “Patient safety is in a state of crisis. I’m not sure where it is going,” said Dr. Robert Wears of the Department of Emergency Medicine, College of Medicine, UF Health Science Center of Jacksonville.

Wears was one of the speakers at a recent Patient Safety Forum at JU bringing together hundreds of healthcare professionals from multiple disciplines to learn, and formally launching the new Quality and Safety Education for Nurses (QSEN) Institute Regional Center at Jacksonville University.

The JU QSEN is one of three regional centers in the United States dedicated to integrating patient safety into nursing education. The others are the College of New Jersey in Trenton and Case Western Reserve University in Cleveland, Ohio.

Dr. Teri Chenot, associate professor in the JU Brooks Rehabilitation College of Healthcare Sciences’ Keigwin School of Nursing, and Dr. Roberta Christopher, assistant professor and Program Director of Health Informatics in the college’s School of Applied Health Sciences, are co-directors of the regional center. Chenot is on the national board.Chenot said she hopes the QSEN center will bring new attention to this national problem as it provides training for nurses and other healthcare professionals from a broad region. Nationally, QSEN started in 2005 at the University of North Carolina Chapel Hill with a seven-year grant from the Robert Wood Johnson Foundation. In 2012, the QSEN Institute moved to Case Western with the goal of establishing seven regional centers around the country.

The JU QSEN center, which will serve the entire Southeast, was made possible with a $44,883 grant from Florida Blue Foundation.

“Patients have an expertise that we must acknowledge,” said Dr. Mary Dolansky, director of QSEN Institute at Case Western Reserve. “QSEN is not a magic bullet, but we have a passion for improving patient care and inspiring students to be advocates of high-quality care.”

Dolansky said it is not enough to train the next generation of nurses in the latest patient safety protocols, so QSEN is developing web-based training models for nurses that it hopes to make available to other healthcare professionals.

QSEN is starting to have a noticeable impact, with patient safety questions integrated into licensing exams and job descriptions. “We want to move into orientation programs for clinicians and practices,” Dolansky said. “We want to develop a new paradigm that puts the patient in the center of health care.”

That kind of paradigm might have saved Dr. John T. James’ son Alex, who in 2002 collapsed and died while running. He was 19.

James, a pathologist and toxicologist, began investigating and discovered a series of medical errors, including a misdiagnosis, failure to tell his son to stop running and not recognizing the need to give his son potassium to stabilize his heart rhythm. He also found basic poor communication between doctors and incorrect information in the medical records.

James chronicled his experience in the book “A Sea of Broken Hearts” and founded Patient Safety America, a website and newsletter that advocates for new attitudes toward patient safety, including how patients can become more involved in their own care, select a quality hospital and deal with medical errors. “There is no American healthcare system,” James said. Instead, it’s a collection of subsystems — Medicare, Medicaid, the VA — that is poorly regulated and is more focused on the needs of the provider than the needs of the patient.

Wears said patient safety is a multi-faceted problem. New threats are constantly arising as new drugs and procedures are introduced. It takes time to access problems and develop safety protocols to deal with them.

And a culture of moral superiority has developed within the healthcare system that resists input from other disciplines like psychology and engineering that could offer different perspectives and solutions, he noted.

Patient safety has become part of the medical bureaucracy, which has assumed that if procedures are broken down into simple steps and best practices established that everything will work, Wears said. Errors are blamed on people failing to follow the procedures.

“The truth is we don’t really know what to do,” Wears said. “Our solutions haven’t worked, and we shouldn’t assume we will always have the answers.”

For more on the Quality and Safety Education for Nurses (QSEN) Institute Regional Center at Jacksonville University, click here.