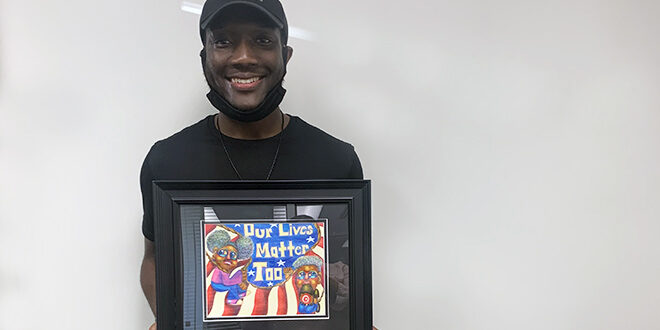 Congratulations to Jacksonville University student Douglas Mealing for his winning submission to the Quest for Justice & Peace: Martin Luther King Jr. Inspired Art Contest. The contest, hosted by the university’s Student Inclusion Center, calls for the creation of an “original piece of art inspired by the ideals of Dr. Martin Luther King Jr. and/or civil rights leaders present or past.”

To enter, students are asked to express themselves through a visual, literary or performance art submission in any of the following mediums: painting, photography, sculpture, video, music, song, spoken word, dance, poetry, short story or speech. Winners receive $100 and a ticket to the city of Jacksonville’s annual Martin Luther King Jr. breakfast. The event, presented by Florida Blue, is usually held in mid-January but was cancelled this year due to COVID.

For his entry, Mealing, a double bachelor of fine arts major with concentrations in illustration and graphic design, submitted “Our Lives Matter Too,” an original work depicting two characters he created his freshman year. According to Mealing, who is scheduled to graduate in 2022, the characters are sending a powerful message.

“What inspired me to create this piece was police brutality numbers rising and the inequality that we continue to face in this world,” Mealing said. “Another thing that I had in mind when creating this piece was the fact that what’s going on in the world is starting to affect the younger generations, both present and those to come. So the fact that the flag is tied around Susie’s neck and Jimmy’s arm is to show how America still has control over what we do and that this vision of equality is just an illusion to satisfy the people, the cold hard truth behind the lies. Jimmy has a target on his stomach to show that young men of color are the target of these killings and that no matter the age there is a target placed on you. The system is waiting for you to mess up so you can get thrown in jail or worse, killed.”

With its beautiful imagery, Mealing has used his artwork to visually and peacefully express not just his own point of view but many of the thoughts and feelings present in today’s society. It’s an approach shared by Dr. Martin Luther King Jr. himself. King’s nonviolence ideals and ever-inspiring “I Have a Dream” speech continue to touch generations to this day, and that influence is recognized by Mealing as well.

“The ideals of Martin Luther King Jr. mean a lot to me, especially considering that I am a young black man in America, because they helped set the foundation for where we are now as a society. We are able to be next to one another and have almost the same equal rights as the white men and women standing beside us. I admire his determination to see his ideals of social justice, freedom and peace come true in a non-violent way.”

While there has been progress in America since the civil rights movement of the 1950s and ‘60s, Mealing wants people to know that there is still a long way to go. As a young man, he has felt the sting of racism in his own life, and he understands the price people pay because of the color of their skin. Lost job opportunities, racial slurs, bullying and brutality remain realities, but Mealing has found a way to bring this message into the light. He has used his artwork to showcase what is still a painful issue in society, and he has done so with color and creativity. Dr. Martin Luther King Jr. would be proud.