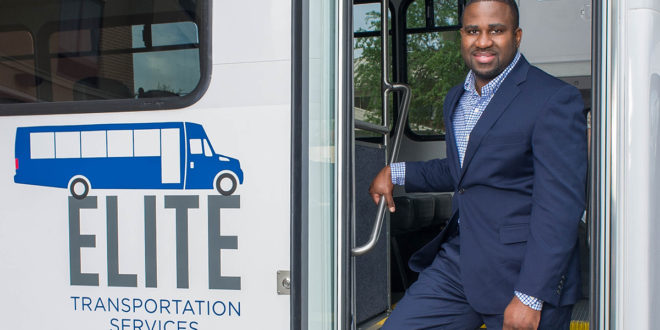 Want a sneak peek at Jacksonville University’s 2018 Matriculation keynote speaker? Get to know JU alumnus Dane Grey (’07) in this Q&A originally published in the Spring 2017 issue of WAVE.

When Dane Grey came to America in the late ‘90s at age 11, he had to adjust to a new culture, a challenging new family financial situation – and a new dress code.

Used to wearing standardized uniforms to grade school in Jamaica, Grey said he had to build up his self-esteem in the face of repeated teasing from classmates over his outdated clothes. “Back then, they wore baggier jeans, and my parents weren’t into that, so my jeans were tighter. But, I had to ultimately be comfortable being different.”

“I definitely had to figure out what was what … I had to get past the initial conversations, and I had to be OK being me.”

And just as Grey stood out back then, today he’s standing out, too, in a different way. At 31, he’s founder and president of Elite Parking Services of America, an award-winning 11-year-old Jacksonville company he built out of his JU residence hall room while completing his bachelor’s degree in Aviation/Airway Management and Operations in the Davis College of Business.

Grey’s growing, 400-plus employee operation has turned heads for its cutting-edge efficiency and service at locations around the nation.

In 2015, Florida Gov. Rick Scott presented Grey with the Governor’s Business Ambassador Award, and in 2016 he was the governor’s guest in the Capitol when Scott gave his State of the State speech, sitting with First Lady Ann Scott. That same year, the Jacksonville City Council passed a resolution commending Grey for his “business accomplishments and contribution to the creation of jobs in Jacksonville.”

Wave Magazine asked Grey to talk about his business and accomplishments.

So, when did you know what you wanted to be when you grew up?

It’s pretty funny, I didn’t understand what I’d be doing long-term until after JU, when I started full-time at the airport, and I saw the competitive side of the business. … Companies in this field must be on top of human capital management, and that’s where eTrac comes in.

It’s proprietary software I developed to allow evaluation of employees in real time. It gives us 24-hour ability to see how our locations are running, how people are performing, using data analytics. One of the weaknesses of companies in a field like this is just relying on personnel and becoming leveraged to one person in a location. By using metrics, you aren’t always scrambling to get customers what they want, because you have accountability that reduces excuses or pivoting from employees; instead, they are constantly improving.

What helps you succeed?

One, I try not to be risk-averse. I get enjoyment out of the challenge of having to put in the hours to figure something complex out. And two, as a Millennial, I’ve always felt we can conquer almost anything with the help of technology. So putting those two together made sense. I will work at something until I get it, even if it takes a 22-hour day. A lot of new graduates might think ‘OK I have a degree, that’s it,’ but that’s just a gateway to get to the next stop; you have to work your butt off.

What set JU’s School of Aviation apart for you?

First, the faculty as a whole, they are so critical to everything I have accomplished so far. They put things in focus and make you see that airports aren’t just government buildings, they are malls and real estate, and they have a huge business component. In other schools’ programs, your understanding of the business side can get lost just learning about regulations. At JU you understand what the data and numbers mean, and they work together with regulations.

Any advice for students, especially those who are entrepreneurial?

Never give up. I know it’s a cliché, but don’t be OK with “No.” When you hear that, it only means you’re getting closer. So long as you have drive and a solid idea, everything will work out with time. Back then I didn’t look at how patience is so critical. We often want to conquer the world today, with limited experience. But you won’t know what’s out there. You need trusted advisors to guide you and help you past the hiccups.

What do you like to do outside of the business day?

I love flag football with friends. I Google things. And I read tech-based stuff and the Wall Street Journal just for fun, which might sound nerdy. I love my Leadership Jacksonville class. And one thing I love is being in a very quiet, relaxed environment, maybe binge-watching Netflix. One birthday I went to Amelia Island, laid on the beach and then binge-watched movies all day and did nothing. It was perfect.

Finally, who and what influenced you?

My mentor was John Clark, who was CEO for the Jacksonville Aviation Authority. He gave me opportunity after opportunity. He changed my life and helped me see that everything had a human dynamic in business. At the same time, I had so many great professors at JU. In close-knit classes, I didn’t get lost like I could have at a bigger university. I can’t stress enough the value of a professor who cares about you personally. They will work with you and talk with you. You can’t buy that.