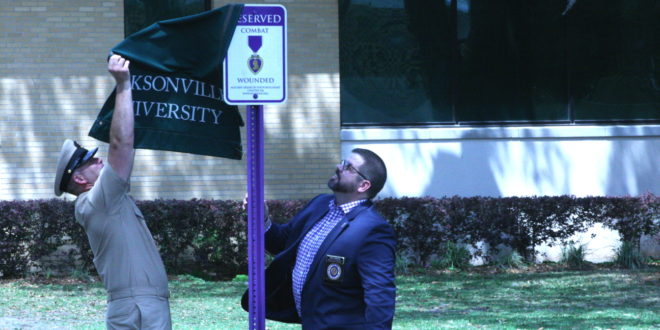 Special parking spaces set aside just for Purple Heart veterans may seem like a modest gesture to some, but to Kinesiology major Sean Karpf, it means “more than you’ll ever know.”

For Karpf, who lost his left leg below the knee and suffered traumatic brain injury in 2012 when he stepped on an Improvised Explosive Device (IED) during a second Afghanistan tour, acceptance and understanding is key to dealing with the onus of Post-Traumatic Stress Disorder.

“My first two years transitioning after coming back, I felt lost and didn’t have a sense of purpose, but ever since I came here to JU, the other veterans have brought me in,” Karpf said at a dedication ceremony Monday, April 3, where the two Reserved for Combat Wounded signs were unveiled on campus.

“I’m grateful that through this we can show the awareness to other veterans in the Jacksonville community that JU supports veterans, and if you’re looking to go to a college, there’s a special college here at Jacksonville University,” he said. “As soon as I talked to JU and the counselors here, I knew I was coming here immediately. I felt I was wanted, and that this university was going to make sure I was set up for success.”

The University, in collaboration with the local Military Order of the Purple Heart Chapter 524, dedicated the spaces in front of Council building and the Gooding building to honor its heroes and remember their achievements, courage and dedication, said Brigadier General (ret) Mike Fleming, Senior Vice President for University Relations and Development. He noted that JU has a military community almost 600-strong, including its Naval ROTC program, student veterans, military dependents and military-affiliated faculty and staff.

“When we think of the heroes who join us today, and those who are here only in spirit, a person can’t help but feel awed by the enormity of what we encounter,” he said. “Heroes are those who risk their lives so others do not have to risk theirs. We are very fortunate at JU to be very pro-military. One more way we can pay tribute is to continually think of new ways to honor them when they suffer injury and receive the Purple Heart.” 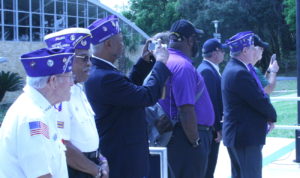 With its Center for Community Engagement that spearheaded creation of the Northeast Florida Military Veteran College Network, a comprehensive Veterans and Military Resource Center, leading-edge Veterans Career Track-Military Veterans program, the Defender’s Den study lounge in the center of campus, a 100 percent Yellow Ribbon match and much more, JU was recently selected among the top schools on the Military Times “Best for Vets Colleges 2017” list, the most prestigious of such designations.

Chris Vedvick, adjutant for the Military Order of the Purple Heart Chapter 524, thanked JU for taking the initiative on the dedicated parking spaces.

“This is a great day for combat-wounded veterans and their families here and in the Jacksonville area,” he said. “Today we honor them by placing signs that allow them respect and show that we care as a community. This helps bridge the gap between military and civilians, in allowing you to understand the sacrifice that has been made for our freedom.”