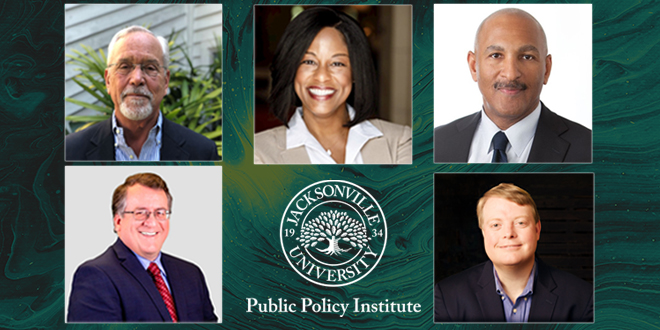 Building upon its role to prepare a new generation of leaders in policy and politics and engage the community with vibrant policy programs and debates, this week the Jacksonville University Public Policy Institute welcomed five new members to its Board of Advisors. The new members include influential leaders in business, law and philanthropy who dedicate their time and resources to positively impact the future of Northeast Florida. Several are Jacksonville University alumni.

The new members, including three Dolphins alumni, include:

Shantel Davis, Vice President of Real Estate and Facility Management at CSX (JU MBA, 2006). In her current role, Ms. Davis leads a team that works with cross-functional business partners to develop professional and comprehensive real estate services for internal and external customers and manages over 5,000 facilities across the CSX network. She serves on the Board of Directors for The Sulzbacher Center for the Homeless, University of North Florida Foundation and the Jacksonville Chamber of Commerce. Ms. Davis was named one of the top 100 emerging leaders by Diversity MBA. She is the proud mother of one daughter and enjoys traveling, cooking, and spending time with family and friends. She is a member of Delta Sigma Theta, Inc., and Jack & Jill of America, Inc. Ms. Davis is a native of Jacksonville, who received a Bachelor of Arts degree from the University of North Florida and a Master in Business Administration from Jacksonville University.

Fred Franklin, Jr., Esq., Managing Director of Rogers Towers and Chairman of the firm’s Board of Directors (JU B.A. in Political Science,1977). Mr. Franklin is a member of the firm’s Litigation Department. His practice is concentrated in the areas of complex commercial, land use and negligence litigation, including personal injury and wrongful death claims. His experience includes representing banks and federal banking agencies involving the workout and foreclosure of commercial and real estate loans. Mr. Franklin also has extensive experience litigating title insurance claims and other real estate matters. Mr. Franklin is a former prosecutor and previously served as General Counsel for the City of Jacksonville and its independent agencies, including the Jacksonville Port Authority, the Jacksonville Electric Authority, the Duval County School Board and the Jacksonville Sheriff’s Office. As general counsel, he was the chief legal officer for Jacksonville’s consolidated government. Mr. Franklin received his undergraduate degree from Jacksonville University and his JD from the University of Florida.

Chris Hand, Esq., Partner at Hand Law. Mr. Hand is a Jacksonville native who currently leads Hand Law, which helps clients anticipate and address opportunities and challenges with government. From 2011 to 2015, Mr. Hand was Chief of Staff at the City of Jacksonville. He recently wrote the 50th Anniversary update to “A Quiet Revolution,” which chronicles Jacksonville’s consolidated local government. Mr. Hand previously served as speechwriter and press secretary for then-U.S. Senator and former Governor Bob Graham. With Sen. Graham, Mr. Hand is co-author of “America, the Owner’s Manual: You Can Fight City Hall – and Win,” a guide to help Americans flex their citizenship muscles and make government respond. He has also served in the United States Electoral College, as policy advisor to gubernatorial candidate Gwen Graham and on the transition team for Commissioner of Agriculture and Consumer Services Nikki Fried. Mr. Hand helped lead the Groveland Four Clemency Coalition, which worked to obtain pardons for four unjustly accused Floridians. Mr. Hand graduated from Princeton University’s Woodrow Wilson School of Public and International Affairs and the University of Florida’s Levin College of Law.

Steve McInall, Vice President of Energy and Water Planning at JEA (JU Master of Public Policy, 2019). He is responsible for long-term planning for JEA’s energy and water sectors, overseeing the development of a more than $1 billion capital program.  Mr. McInall’s groups are responsible for the Integrated Resource Plans for both the electric and water systems. He is also responsible for JEA’s renewable energy portfolio, including landfill gas and solar photovoltaic.  He is also responsible for real estate acquisitions and sales. Mr. McInall holds bachelor’s and master’s degrees in Nuclear Engineering from the Massachusetts Institute of Technology and a Master of Public Policy degree from Jacksonville University.  He is a licensed professional engineer in Florida, Georgia, South Carolina, North Carolina, Massachusetts, New Hampshire and Vermont. He is also a Leadership in Energy and Environmental Design (LEED) Accredited Professional in Building Design and Construction. Mr. McInall is on the Board of the North Florida Chapter of the US Green Building Council and serves as vice-chair of the St Johns County Citizens Flood Mitigation Advisory Committee.

Chuck Wodehouse, President of CSX Technology (retired). Chuck is a retired Fortune 500 executive with a long association with Jacksonville University. He spent most of his business career with CSX Corp. and its predecessor companies, last serving as President of CSX Technology and Senior Vice President of CSX Transportation. In retirement, he and his wife, Camilla, have been active in a number of philanthropic and community activities and were named NE Florida Outstanding Philanthropists of 2017. He has served JU in various capacities, including 18 years as a Trustee and as the initial chairman of the Davis College of Business Advisory Board. He and Camilla have been frequent donors to JU, including most recently to the Public Policy Institute as founders of the MPP Minority Fellowship Program. Chuck received his undergraduate degree from the University of Virginia and his MBA from Rutgers University

“We are honored to welcome these new advisory board members and great community stewards who will enrich the Institute with their expertise and strategic insight,” Institute Director Rick Mullaney said. “These leaders come from a diverse group of industries and experiences, and I’m confident their contributions will serve our students, our University and the community well.”

The nonpartisan Institute Board of Advisors is a varied cross-section of some of Florida’s most respected and successful business, civic, and community leaders. It includes CEOs from private, public, or non-profit organizations; former elected officials; past presidents of the Jacksonville Bar Association and the American Medical Association; the heads of boards for major hospitals, businesses and civic groups; as well as leaders in education, banking, finance, transportation and healthcare.