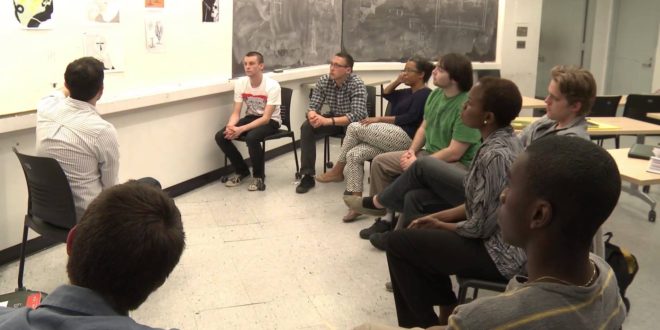 Assistant Professor of Illustration Nicholas McNally has come a long way since winning his first art contest in second grade.

While that youthful win earned him a coveted bag of jelly beans, his latest work has a much a farther reaching scope as it will be on display with work from artists throughout the country at the Illustration West 55 in Los Angeles in January. 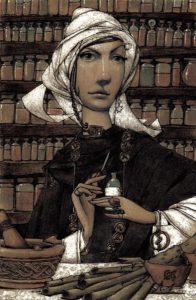 McNally’s work, entitled Lucrezia, Apothecary: Specializing in the Treatment and Cure of the Heebie-Jeebies was selected by a jury of eight judges for The Society of Illustrators of Los Angeles (SILA) and will be held at the SILA gallery beginning Jan. 6. SILA is regarded as the major professional illustration organization on the West Coast.

“It’s an annual exhibit and you can enter any work done within the last year,’’ McNally, who becomes the latest from the College of Fine Arts to be selected for a juried exhibition, said. “I entered three and this one was accepted. This is the biggest competition on the West Coast for illustration.’’

McNally, who received the acceptance in late November, stepped out of his comfort zone to produce the work.

“The subject matter and the medium each had their own inspiration,’’ he said. “The medium is colored pencil. I’m usually an acrylic painter. Acrylic is strong because it can be used opaquely and you can mix any color you want. But painting takes so long. You have to squeeze the paint on your pallet, mix it, apply it, it takes time to dry and cleanup. I wanted to revisit colored pencil. I’d always thought of it as a wimpy kind of medium: it’s always applied very lightly and the colors are limited by what you’re given.’’

Because he hadn’t taken advantage of the pencil’s strength, McNally, who estimates spending about 80 hours on the illustration, had to give the opacity some power.

“I saw potential in the pencil because I could be precise with it and, after applying multiple layers of color, I was able to achieve the opaque, yet luminous, tones I was after – and all I had to clean up were a few pencil shavings,’’ he said. “It was an experimental piece in terms of the medium and I was happy with the outcome.’’

The subject matter stems from McNally’s belief that each of us has the heebie-jeebies to some extent. The term was coined in 1923 by American cartoonist Barney Google (no relationship to the search engine) and has come to mean “a state of nervous fear or anxiety.’’ His objective is to make his work a remedy for the affliction.

“Our nervous fear and anxiety are certainly very real and pressing, but so are their opposites: courage and calm,’’ McNally said. “Add dignity, joy, and humor, and we confront an entirely different realm – equally real and pressing. That is the remedy for the heebie-jeebies, and that is what I strive to depict in my work. So, as one views my drawings and paintings, I hope you will look beyond the literal, illustrated scene. You will find something to ease the heebie-jeebies in there.’’

This exhibition is merely the latest work, he has exhibited from coast to coast throughout his career, of his passion that began in childhood with that first win in second grade despite thinking that work was ruined when a classmate bumped his arm.

“It was a surprise (that he won),’’ he said. “It was an Easter contest. We all had a bunny and Easter basket of candy, a coloring book type thing. I remember I was coloring it in and this kid ran by me as I was coloring in the basket with brown and he made my arm jerk. The brown ran out of the line and I was really annoyed. I thought I would never win it, but did, and won that bag of jelly beans.’’

Since, he has been happily working his craft and says much of his success is because of his family and the support his parents have given.

“I think every kid has that natural inclination (to draw). You definitely have to have a certain aptitude to excel as an artist, but a big thing I’ve discovered in my own experience and in my experience as a teacher is I have a really supportive family,’’ McNally, who attended the Massachusetts College of Art and did his graduate study at the Academy of Art in San Francisco, said.

“A lot of students I know, and have known, were discouraged from becoming art students because they didn’t have that kind of support. My parents were supportive all the way. They had faith it would take me somewhere.’’