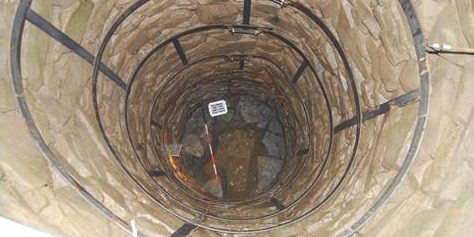 A long-running project to excavate a pair of water wells at the site of Cetamura del Chianti in Italy has turned up a treasure trove of ancient Etruscan and Roman artifacts and Associate Professor of Art History Cheryl Sowder was a key player in the finds.

From bronze vessels and silver spoons to coins (one Greek, the remainder Roman), ivory and bone implements and intriguing organic finds, the archeologists have completed their work and are readying to put the history on display in Florence, Italy, beginning June 9, 2017, at the Archeological Museum of Florence. The exhibition will be ongoing for about two and a half months and will not make its way to the United States.

The finding of that history actually began in the 1960s with the discovery of the first well at the time of the discovery of the site of Cetamura, located in the Italian countryside between Florence to the north and Siena to the south. Digs, sponsored by permit-holding Florida State University, have been held every year since the 1970s with work at the site intensifying about six years ago.

Professor Sowder, who had been involved occasionally during the early days, has been deeply involved as Associate Director and Registrar of the well excavations since the ramped-up activity.

“Both wells are Etruscan although they are different in architecture,’’ she said. “Well 1, about 100 feet deep, which had the most spectacular finds, is cut out of sandstone bedrock and is shaped from round to rectangular. Well 2, constructed of sandstone blocks, is beautiful as it is perfectly circular. We finished the very deep well in 2015 and started and finished the second well (about 25 feet deep) this past summer.’’

The excavations, which run about five and a half weeks in early summer, always were initiated with a draining of the wells. In a departure from the usual, most archeological sites don’t have water, each well would accumulate up to 15 feet of rainwater per year. The drained water was used on site to prewash the artifacts, three were thousands of them, as they were sent to the surface.

Among the most fascinating objects, and there were many as normally at sites one might find 12 special finds a season but these wells gave up 480 and 680 in successive summers, were the organics, especially grape seeds found in both wells.

“You would not believe the number of organic finds,’’ Professor Sowder said. “Hazel nuts, cherry pits, olive pits … the wells preserved these materials. In Well 1 we found about 500 grape seeds and there were more than 1,000 from Well 2.

Preliminary tests have revealed some interesting information on the seeds.

“We are able to say they are ancient and there are two kinds,’’ she said. “One form the Etruscan period, one for the Roman period. Also, they are different grapes as there are both table grape sand grapes for wine; one is a red grape and one a white grape. Where we dig in Tuscany it’s exciting because we’d like to make a connection with the Chianti wine (native to the area).’’

One of the professor’s main roles was as Registrar, which included supervising students in rinsing, sorting, bagging, tagging and compiling field notebooks. The organic materials were immediately placed in containers with well water for preservation.

“It was very complex but worked beautifully,’’ Professor Sowder said. “These wells weren’t used for drinking water, they were for gathering water for industrial purposes and we know that as they put animal bones in there. The deep well was used for ritual purposes where they made gifts for the gods and in the middle ages made it a rubbish dump.

Professor Sowder currently is engaged in writing sections of the catalog that will accompany next summer’s exhibition. Now that work on the wells is finished, she will return to dig at Cetamura next May to Jun in another area of the site.