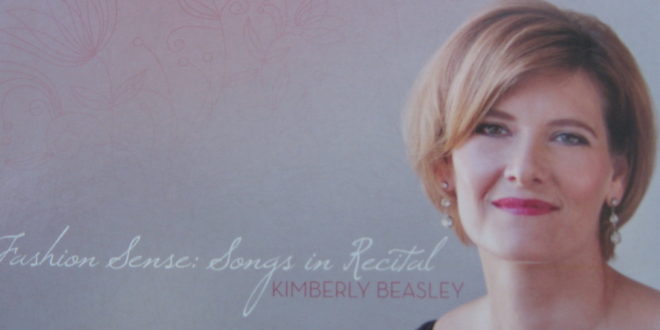 The College of Fine Arts professor won the recording acclaim for her CD, Fashion Sense: Songs in Recital, released about a year ago in collaboration with Dr. Scott Watkins, Associate Professor of Piano, who accompanied on the work.

The CD features selections from Debussy, Tchaikovsky, Wolf-Ferrari and Strauss and is her first solo effort.

“Beasley’s selections reflect considerable intelligence and taste,’’ wrote reviewer William Thomas Walker of CVNC.org. “Her mastery of four languages and vocal technique are consistently evident. Her care for words is reflected in her application of her palette of tone color and carefully shaded dynamics … her pleasing voice has a warm tone and is evenly supported across its range.’’

Beasley’s intentions also could stand up to critical review as the work as she has donated proceeds to the American Diabetes Association (ADA).

“That is a really neat thing,’’ she said. “My father and two brothers each have Type 1 diabetes. I am so proud to represent this cause with my voice.’’

Beasley said she will be doing a concert with Theatre Jax next year that will be in conjunction with the ADA. Although the date hasn’t been set the concert most likely will be next fall.

The effort on Fashion Sense: Songs in Recital, which was produced by the University’s Dolphinium Records and recorded at Terry Concert Hall on campus, was a months-long venture.

To begin, she and Dr. Watkins consulted on the music.

“He likes Tchaikovsky so I knew we would do Tchaikovsky,’’ she said. “Then it was up to me. When I do concert work, I’m usually not choosing the music but when I do recitals it is all up to me in collaboration with my pianist. It’s nice to have that balance.’’

For this work, takes per song were at a minimum.

“That is something I’m really proud of,’’ Beasley said. “I did no more than three takes per song and we picked the best take. There are only two spots we edited on the entire tape so it is virtually live. It’s a typical song recital in that you present different languages, different composers and I stayed with the same genre, romantic and post-romantic.’’

Following recording, Olson mastered the music down to how much reverberation should go on Beasley’s voice.

“There wasn’t much he had to do,’’ she said. “We raised the acoustic ceiling on top of my voice because otherwise, the size of my voice distorts the microphone!  It’s kind of funny, but I am operatically trained and we have a lot of overtones in our sound that tend to distort the microphones.’’

In addition to the successful CD, Beasley certainly has been busy with other projects.

She and husband James authored an article for the Kenneth Burke Society Journal, she, of course, has classes to teach, musicals to direct and concert to perform.

“When I perform a concert locally that’s a part of my faculty investment,’’ she said. “When I perform outside of school, I am able to donate those efforts to the cause of the ADA and I love that community service.’’

On campus, in addition to her academic duties, Beasley will be directing the student-run production of Spring Awakening next semester and a musical in the fall of 2017.

“When I direct a show I poll the students to see what they are interested in doing and have that discussion with my colleagues about what we think the department needs to do,’’ she said. “We make that decision together.’’

She and Dr. Watkins also are discussing a next CD project.