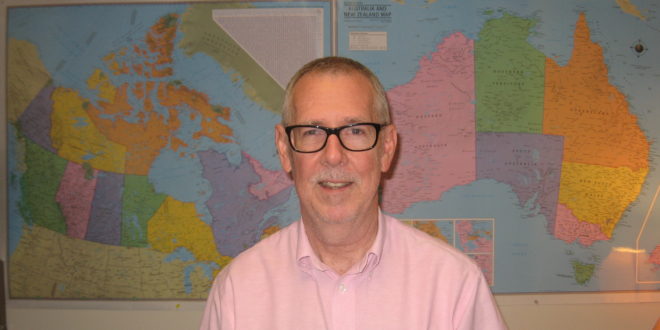 Professor Eric Thomas has created progrmas for the study of both Canadian and Australian history.

Prof. Thomas will step away from chair; teaching streak intact

When it comes to ongoing longevity streaks, Professor Eric Thomas may rank up there with baseball great Cal Ripken Jr.

For every school term during the past 25 years Thomas, an Associate Professor of History, has been in the classroom to teach. Every fall term, every spring term, every summer term, 25 years.

“I’ve been teaching every term in the traditional program with 8 a.m. classes the whole time,’’ he said. “All year round for about a quarter century.’’

In and of itself that, obviously, is quite a feat but it’s not the only thing Professor Thomas has been doing.

In January he will step down as Chair of the Division of Social Sciences his second such stint in his JU teaching career that began as a part-time instructor in 1979; he became full time in 1987.

“My big run (as Division Chair) was earlier when I got out in 2006 after nine years,’’ he said. “This one I came back to because we thought our chair, (Professor of Psychology) Sherry Jackson, would be a great faculty chair and she couldn’t do both. I agreed to step in and run for a term. I’m actually getting out early and she will be interim chair starting in January.’’

Thomas, who graduated from JU in the 70s and whose father attended in the 50s, offered a variety of reasons for leaving the chair from “a little burnout’’ to family considerations and said he isn’t sure he can now devote the time needed to attend the position properly.

“Division chairs are working as much for the faculty (17 faculty members in his case) as they are the senior administration,’’ he said. “You are selected by faculty, still teach half time and know you are going back to the faculty ranks.’’

The demands are great in the service and he sees himself more a day-to-day presence as opposed to being a visionary.

“One of my weaknesses, and I’ve got many as a chair, was I wasn’t that great on long term vision,’’ he said. “I’m a little better as a day to day manager which is an important part of the job but increasingly JU is moving forward. That calls for more vision from chairs and deans.’’

As he leaves the position he clearly is looking forward to getting back to full-time teaching and says he is feeling rejuvenated this term in part because he is teaching a Florida history course for the first time since 2013.

“It’s a good time to go back to full time teaching which is the best job on campus,’’ he said. “It’s a great way to make a living.’’ He certainly has made an impact and previously was Professor of the Year and received the Faculty University Service Award.

“I get to teach the history core class and it’s neat to see people start in college,’’ he said. “In the upper division we do a lot of international studies with history. What’s nice about that is people take international studies for core credit and it becomes an offering for majors. In that spirit I have developed courses in Canadian and Australian history. My training is in U.S. history, I am sticking to these continent sized, English speaking countries. The differences are interesting.’’

Highly regarded by his students, Professor Thomas says his definition of success has evolved over the years and it seems to have landed in concert with the work of teaching he does.

“When I was younger I might have judged success by do people recognize you, did you make a good living, that sort of thing,’’ he said. “I’ve come to the conclusion that a successful life is one in which if you are physically and mentally capable of doing it you took care of yourself and you helped a few people along the way. If you’ve done that, anything else in gravy.’’