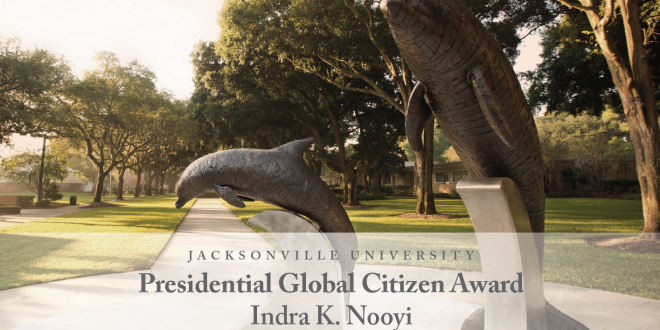 The award will be presented to Ms. Nooyi at a 12:30 p.m. luncheon Thursday, Nov. 13, at JU Dolphin Green, with a question-and-answer session immediately following. Individual, corporate and sponsor-level tickets are available.

“There are only a handful of world ambassadors who truly personify the 21st Century Global Citizen,” said JU President Tim Cost. “Indra Nooyi is a leader among leaders in this regard, and we are privileged to honor her on our campus. She exemplifies much of what we stand for here at Jacksonville University.”

The Jacksonville University Presidential Global Citizen Award is given to a visionary leader whose impact is felt “well beyond the bounds of his or her recognized responsibilities.” The honoree embodies the University’s ideal of a globally engaged citizen who uses exceptional talents to create new opportunities to lead, live and learn.

Jacksonville Mayor Alvin Brown, a JU alumnus, said he was honored to have “one of the world’s most influential and respected women business leaders” visiting the city.

“Jacksonville University is a great school with great ideas and great people, so it’s no surprise that a visionary leader of her stature is being honored with the Presidential Global Citizen Award,” he said.

JAX Chamber President and CEO Daniel Davis welcomed the prospect of the attention the event will bring the city.

“We are consistently pushing and looking for ways to increase Jacksonville’s role in the global economy, and one step in the process is learning from the CEO of one of the largest international corporations,” he said. “This is another example of JU President Tim Cost working to expand the reach of Jacksonville University and partnering with the business community.”

With three decades of senior-level executive experience, Ms. Nooyi became CEO of 300,000-employee PepsiCo in 2006, and Chairman the following year. She has more than doubled sales from outside the U.S. in her eight years at the helm, and international markets now make up about half of PepsiCo’s $65.5 billion in revenue. Fortune Magazine regularly ranks her at the very top of its annual “50 Most Powerful Women in Business” issue.

Jacksonville Civic Council Chairman Steve Halverson, CEO of The Haskell Co., said Ms. Nooyi epitomizes the traits of dynamic leaders who have the most wide-reaching impact.

“Indra Nooyi not only leads one of the world’s great companies, she has redefined what it means to lead — through her global vision, her progressive commitment to sustainability and how she has made PepsiCo a hotbed of global leadership development,” he said. “Jacksonville University could make no finer choice for its Global Citizen Award.”

President Cost, who prior to his selection as Jacksonville University President reported directly to Ms. Nooyi as Executive Vice President of PepsiCo Global Corporate Affairs, emphasized that her candor and passion in using her high profile to advocate for issues outside the borders of the financial and corporate world make her an outstanding choice as first honoree for JU’s new award.

“In my 32 years in senior management at many of the world’s greatest companies, I never saw a leader match Indra’s strategic genius, non-stop intensity and remarkable dedication and compassion,” he said. “Her combination of business skill and global mindset set a high bar for us all, every day.”

For more information on Ms. Nooyi, The Presidential Global Citizen Award and the Nov. 13 luncheon at Jacksonville University, visit landing.ju.edu/globalcitizen.

Beyond her substantial impact in the corporate world, Ms. Nooyi has made it a priority to give voice to numerous important and timely global issues:

·         She has been a vocal proponent of industry, government, non-profits and philanthropic organizations working together to promote a “Culture of Health” worldwide, receiving a standing ovation after a memorable keynote address in which she asked an audience of top executives of the Grocery Manufacturers Association and National Retail Federation: “Can we all come together to address this issue of obesity?”

·         PepsiCo Inc. has kept a laser focus on sustainability under her leadership; for example, it committed to achieving a “positive water balance” — replenishing more water than it uses — in its India facilities, and partners with the H20 Africa foundation to foster African clean water initiatives.

·         Ms. Nooyi is the driving force behind PepsiCo’s Performance with Purpose, a promise of “finding innovative ways to minimize our impact on the environment and lower our costs through energy and water conservation, as well as reduced use of packaging material; providing a safe and inclusive workplace for our employees globally; and respecting, supporting and investing in the local communities in which we operate.”

·         For her civil justice advocacy efforts, she was named an honorary chair of The World Justice Project, an independent organization working to advance the rule of law around the world in order to afford communities opportunity, equity, economic development, accountable government and respect for fundamental rights.

·         She created a viral YouTube sensation this past summer when, while being interviewed at the Aspen Ideas Festival, she offered a frank assessment of women’s work-life conflicts, bringing voice to a too-often ignored issue when she bluntly told her interviewer, “I don’t think women can have it all.” Ms. Nooyi touched hearts with her personal insights and tips into how, as one of the world’s most powerful executives, she still must cope with issues related to her roles as CEO, daughter, wife and mother.