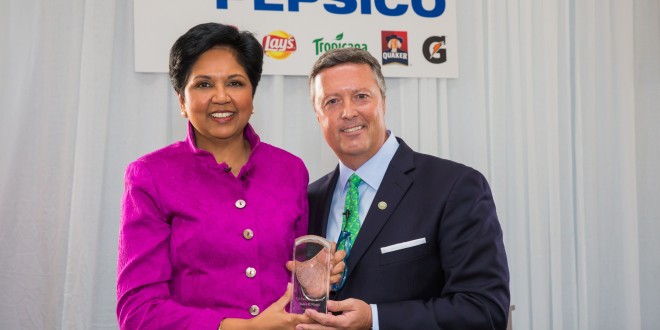 Before an outdoor luncheon crowd of more than 400 top business and community leaders, Nooyi called it “an absolute honor and true privilege” to accept the award. It is given to a visionary leader whose influence is felt “well beyond the bounds of his or her recognized responsibilities” and who embodies JU’s ideal of a “globally engaged citizen creating opportunities to lead, live and learn.” 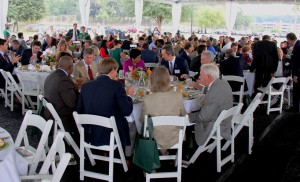 “I am humbled to receive an award that focuses on the citizen … all businesses must understand that citizenship is not tangential to the business. It is the business,” Nooyi said. “One of my biggest priorities has been to transform PepsiCo into the best corporate citizen possible.”

The award comes at an exciting time of expansion and progress at Jacksonville University, said President Tim Cost, who praised Nooyi for her vision, tenacity and compassion, and for exemplifying “one of the most important things we stand for here at JU: a commitment to global engagement.”

“This is a true culminating day in the history of our great institution,” he told the gathering. “We have never had a more prominent business leader on our campus, at the apex of her career, than the extraordinary person we honor today.”

Nooyi, named one of the 50 most powerful women in business worldwide by Forbes Magazine, helms a multi-dimensional global corporation with sales of more than $67 billion, more than 270,000 employees and a market value of $145 billion. From its modern and modest beginnings nearly 50 years ago, it now operates in 200 countries – more than are in the United Nations.

An audience including such prominent local figures as JAX Chamber President Daniel Davis, former Jacksonville Jaguars owner Wayne Weaver and long-time Pepsi bottling leader Bob Shircliff gave a prolonged standing ovation as Cost presented the award to Nooyi. He then informed her she had been made an honorary JU alumna, and announced formation of the Indra K. Nooyi Scholars at Jacksonville University, a fund for international students and studies. 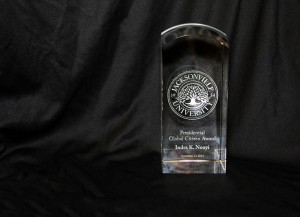 Cost engaged the CEO in a free-form question-and-answer session, in which the two sat in armchairs and discussed topics ranging from business culture and corporate responsibility to leadership and global concerns.

Nooyi wove a common thread through the spirited dialogue of how companies can “not only do well, but do good.” She described PepsiCo’s pioneering Performance with Purpose initiative as a blueprint for industry in the wake of financial crises and global instability. Businesses must look at their roles not just in creating wealth for themselves, but in actively improving society — “and not just as an afterthought.”

“At Pepsi, we asked, ‘What if we worry about how we make money, and not just how much we make? … What if we worry about increasing human health, decreasing fat and sugar, increasing whole grains and protein, decreasing our water usage, lowering our use of plastics, increasing electric trucks in our fleet and cutting our carbon footprint?’ ” she said. “We will leave the planet in a better place. By doing these things, we make more money, and we keep the growth going. So we did it, by creating a culture where every employee can bring their whole self to work and become true citizens of their community.”

Asked by Cost about training and equipping the next generation of leaders, she challenged universities and business schools in particular to spend less time teaching students how to make money at all costs, and more on enabling them to unleash their own creativity to approach issues from all angles, including the legal, political, ethical, environmental and human ramifications.

To create the best outcomes, Nooyi said she surrounds herself with people who challenge her. She drew laughs by describing Cost, a former senior PepsiCo executive, as “a tough one to manage … that’s the reason I love you so much — you always kept me on my toes.”

In response to a question, Nooyi voiced concerns about “discussions of a return to the Cold War and going back to the days when we had hostile relations with Russia. … We have to be very careful. We are at a point that we didn’t have to be at, but here we are. I wish business was consulted a bit more in formulating policy.”

One of the biggest surprises Nooyi has seen? The “short-termism” of today’s investors, which hamstrings corporate America.

“The average stock-holding period has gone from seven years as recently as five years ago to three months now,” Nooyi said. “It is crazy what is going on, where companies feel they must be combined, or buy back shares, or cut investment in research and development, or fire people left, right and center. Companies aren’t run on spreadsheets. … Our leading thinkers, academics, government, everyone, are too quiet about this. We have to stand up and say enough is enough, because we are at an interesting crossroads.”

As far as advice to young people pursuing business careers, Nooyi told them to become lifelong students on a variety of topics, to learn from their elders – and to open their eyes to their broader impact on society.

“Don’t get selfish. Always remember you are citizens of the community, wherever you operate,” she said, returning to her theme. “Worry about how you make money, and focus on prevention when approaching problems, not just the cure. Yes, you can make money, but do it the right way.”