Home » All Sections » Our Place in the Sun: JU Outshines the Rest – Ronald Grigg 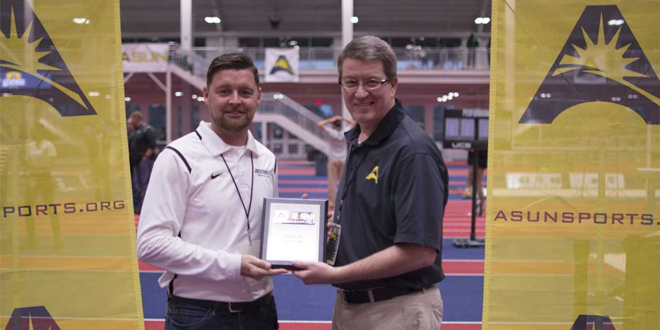 Our Place in the Sun: JU Outshines the Rest – Ronald Grigg

Jacksonville University’s track and field Coach Ronald Grigg, a native of Sharon, Massachusetts, and a 1993 graduate from the University of Massachusetts-Dartmouth with a bachelor’s degree in political science, left school with, as he says, “an interest in using my knowledge and the necessary politics to make a difference in society; that was my main goal.” Coach Grigg became the JU Director of Track and Field and Cross Country in 2002, after having served one year as associate head coach. Since that time, he has won 22 conference championships, 10 All-American titles, and a well-deserved NCAA championship.

As Emily Myslinski, a track athlete and rising senior can personally attest, Grigg’s focus is on student success. “Coach Grigg wants us to do the best that we can do.” For Grigg, however, athletic accolades are not what he seeks, and according to him, academics are on an equal playing field with athletics. “We look for students who can thrive here academically. They are students first and athletes second.” This commitment to academic excellence truly shines as Grigg’s 17 years coaching at JU includes USTFCCCA All-Academic Team Recognition 13 consecutive years (2002-2014). Just this past year, his team maintained a cumulative GPA of 3.57.

Clear in his conviction to make a difference in society, Grigg has his team volunteer twice a semester at the Sulzbacher Center, assisting homeless populations in Northeast Florida. Grigg says, “This opportunity helps the team see how people in the community live, giving them perspective and appreciation for things they may take for granted in their own lives.” He hopes to continue giving back to both his team and the community, passing on his knowledge of the sport and a passion for service. “I’ve been coaching at this school for a long time, and I hope that I can continue doing what I love, for me, and for JU.”