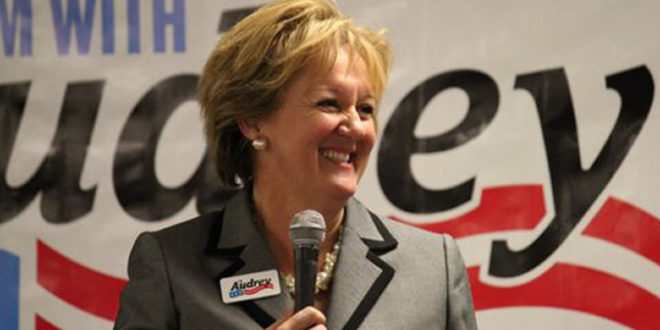 “I’m with Audrey.” That was what the t-shirts and campaign signs stated, and it’s something people still say six years after Audrey McKibbin Moran’s run for mayor in Jacksonville.

In the decades leading to that memorable 2011 race, she held many influential roles—a mother of four, the wife of a well-respected judge, and a successful local attorney who served several years in City Hall. Later she held the reins as CEO of the Sulzbacher Center, Northeast Florida’s largest provider of services for the homeless and displaced, and one of only a handful of centers across the nation that offer a full range of services 24 hours a day, seven days a week.

Her resume is as diverse as it is impressive. A product of Duke University’s School of Law, where she served as student body president, Moran held key leadership roles for Jacksonville Mayors John Delaney and Ed Austin. She began her legal career with Mahoney, Hadlow & Adams, then later joined the State Attorney’s Office. In short order, she became the first female attorney appointed a director in the Fourth Judicial Circuit.

Moran is no stranger to leadership or Florida politics. Now serving as the Senior Vice President for Social Responsibility and Community Advocacy at Baptist Health, she still makes time for special speaking engagements, including her visits to the Institute. Addressing a group of students pursuing a Master of Public Policy (MPP) degree, currently the only such degree in Florida, Moran discussed her personal history and the history of women in politics on a larger scale.

Once More Into the Fray

Today in America, women voters outnumber men. In addition, voter turnout tends to be higher among women. In the 2004 presidential election, women voters outnumbered men by 8.8 million, and in the 2008 election, 9.3 million. Voter participation counts showed little change from 2008 to 2012. In fact, since 1980, a larger percentage of eligible women have voted than eligible men, undoubtedly affecting the outcomes of the past eight presidential elections.

Whether she’s addressing a troop of Girl Scouts or a university audience, Moran reminds people that a woman’s right to vote hasn’t yet reached its hundredth year. The 50-year battle fought by American women to secure the right to vote was finally won in 1920. Incidentally, the legislation passed without the support of Florida.

And no one appreciates the beauty of the women’s suffrage centennial observance coming up in 2020, a number that implies vision and foresight, more than Moran.

One of her favorite suffragettes is Jacksonville’s own Mary Nolan. A resident and grandmother from historic Springfield, she was also the oldest suffragette in the National Women’s Party. As Moran will tell, Nolan’s age didn’t stop her from participating in picket lines, marches and hunger strikes, and suffering through an infamous “Night of Terror” in prison after her arrest Nov. 10, 1917. Over two years, Nolan was arrested 10 times, and jailed five of those times. She eventually joined the “Prison Special,” a train car that toured the country, and recounted the horrors of her shared struggle and of her experiences under the direction of President Wilson’s administration.

The Prison Special arrived in Jacksonville’s Hemming Park in February 1919 with Nolan aboard.

It is alleged that the federal judge who reviewed Nolan’s case advised President Wilson that he was “confusing crazy with courageous” when it came to the behavior of the suffragettes and their dauntless pursuit.

Moran said she has felt the incredible impact women can have in the political realm, and has also experienced the struggle specific to women seeking elected office. Currently, in the 115th U.S. Congress, women hold only 21 of the 100 seats, despite the fact that women make up more than half of the adult American population. In the House of Representatives, only 19 percent are women. Likewise, only four of the 50 current governorships are held by women.

To put the disparity in more practical terms, the U.S. Senate did not add a women’s restroom to the Senate floor level until 1993, and it wasn’t until 2011 that women in the House finally gained a seat (four seats actually, and two sinks).

For Florida residents, 30 years have passed without female representation in the Senate. Jacksonville’s elected offices follow the bleak national averages, with only two women attempting a run for the mayor’s office. Moran was the most recent.

From the Ballot to the Board Room

Beyond politics, corporate America looks shockingly similar. Many political analysts, sociologists and researchers predict that it will be another 30 to 40 years before the number of women in key business leadership roles and seeking elected office equals the number of men.

Moran said she is not willing to wait another three or four decades, and she regularly encourages young women to engage civically and consider leadership roles in whatever arena they find themselves. She also lauds key Jacksonville women like Tillie Fowler, Ginny Myrick, Elaine Brown, Lori Boyer, Anna Brosche, Melissa Nelson and others who deserve the prefix “The Honorable” before their names. Moran said she believes their examples help younger women envision what to aim for.

“I’d do it all over again,” she says of her run for mayor. “I would have regretted it if I didn’t.”

Part of the Institute’s annual speaker series, Moran addressed students of JU adjunct professor and well-known political consultant Paul McCormick. His course on Political Campaigns, Governance, and Public Policy Initiatives is an elective in the MPP program. She participated in a Q&A after speaking, describing what life was like during her mayoral campaign. One of her areas of interest is research determining why women tend not to seek elected office.

The Washington Post has covered this topic on a number of occasions, but specifically cited the research of Political Parity in 2014, offering many reasons women either don’t run for office at all or struggle in their pursuit of elected positions.

As expected, funding is a top issue for female candidates. Roughly 45 percent of women surveyed said their affiliated party backed male candidates more often and more substantially. Moran was not surprised by the results of this study and has her own list of reasons why women avoid seeking office:

“What would they think of me, not as their mayor, but as their mother?”

When Moran considered running for office, her family had many long conversations about the ramifications of such a decision and agreed to make the journey together. She was determined to run a campaign that would make her family of six proud. She found constant motivation in asking herself, “What would they think of me, not as their mayor, but as their mother?”

Her husband, the Honorable John A. Moran II, Fourth Judicial Circuit Court Judge, could not legally attend any campaign functions. This meant she had to say yes to 18 months without his presence at a myriad of events, dinners, fundraisers and stops made by the campaign—a hardship for them both, she said.

She says it’s a sacrifice not many women are willing to make. Even so, she is always eager to share some of the pivotal moments spent with her children, both during and after the campaign. They are moments she will never forget. Like the time her 16-year-old son wrote an essay at school about how incredibly proud he was of his mother, whether she won or not.

Jacksonville University’s recognition of Women’s History Month has included discussions on topics such as Islam, gender in the workplace, and racial misconceptions, as well as highlighting Chancellor Emeritas Dr. Frances Bartlett Kinne as she celebrates her 100th birthday. March has also been a time to celebrate the University’s student athletes and women’s teams, to hear from several members of JU’s faculty, and to welcome guests like Moran.

Within the past year, the Institute has welcomed to campus a number of influential women as speakers and mentors, including Congresswoman Gwen Graham; City Council President Lori Boyer; District Judge Wendy Berger, Fifth District Court of Appeal; and Amy Coney Barrett, Research Chair in Law, Professor of Law, and former clerk to the late Associate Justice Antonin Scalia.

For more details about upcoming PPI speakers and other events, please visit ju.edu/ppi.