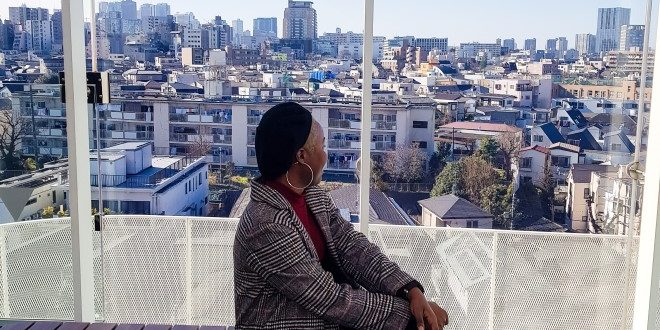 Tasha-san reporting live from Nishitokyo! Truth be told, with a two-month spring break, I worried that I would run out of things to do. I can tell you now that my worry was in vain.

To kick off the break, my friend and I set off on a day trip to Kawaguchiko, a town at the base of Mt. Fuji. At Kawaguchiko, we immediately searched for the perfect view of Fuji-san. Unfortunately, it was cloudy and we couldn’t see much until later in the day. Once we realized this, we decided to tick off the next thing on our itinerary: ride the cable car for a panoramic view of Lake Kawaguchi.

This is a good time to mention that we both have a fear of heights. With our nerves shot, we proceeded to the next thing on the agenda—experiencing a Japanese onsen or hot spring. Part of Japanese culture, as well as other Asian countries, is the use of public bathhouses and hot springs. The onsen we chose advertised the best view of Fuji-san and we were not disappointed.

We found ourselves in an open-air bath on the seventh floor of Hotel Mifujien with a stunning view of Fuji-yama. The contrast between the chill of the winter air and the heat from the onsen coupled with the feeling of being nestled away from society with Fuji-san as our only companion made this an unforgettable experience.

The next adventure took us to Kamakura, about an hour away from Tokyo by train. The weather was absolutely perfect, so we set off in high spirits as the sun graced us with a rare appearance. We visited the Kamakura Daibutsu or The Great Buddha, which has been around since 1262.

Afterwards, we spent the rest of the afternoon wandering the grounds of the Hase-DeraTemple, the biggest and most elaborate I have encountered. I plan to visit Kamakura again in the summer and explore its beach front.

Stopping next in Yokohama’s famous China Town, we joined in on the Lunar New Year festivities. It definitely felt like we had left Japan for a little bit. The main street that led into China Town was a completely different atmosphere. The architecture, the language, the food—all became predominantly Chinese.

A few months after arriving in Japan, I was introduced to a meat-filled bun called nikuman, a Japanese take on the traditional Chinese steamed bun, Xiaolongbao. I have been hooked ever since. Coincidentally, this is one of the most famous snacks sold in Yokohama’s China Town, and most importantly, they are sold in extra-large sizes. I was one happy camper.

In the after-glow of a nikuman stupor, we headed toward Yokohama’s city center and stumbled across Cosmoworld, an amusement park. We spent the rest of the evening screaming to our hearts’ content, dropping from dizzying heights, spinning wildly, and swerving precariously on the most extreme rides we could find.

Though it has not been all fun and games. I spent a significant amount of time sending out applications for a part-time job. Luckily, I got one! In between adventures, I now work as an English Chat Host at an English language café called Leaf Cup. I have had some really interesting conversations with lots of different people—teachers, college students, stock brokers, etc. It is the furthest thing from boring.

As for this week, I have a late-night karaoke date with friends—this  is a must when you come to Japan—and a mid-afternoon run around the imperial palace. Sakura is already blooming!

Natasha Ubani is an international student from Nigeria and a Junior at JU, pursuing a double major in International Business and Marketing. She is currently spending her Junior year at Waseda University in Tokyo as a Davis College of Business exchange student.