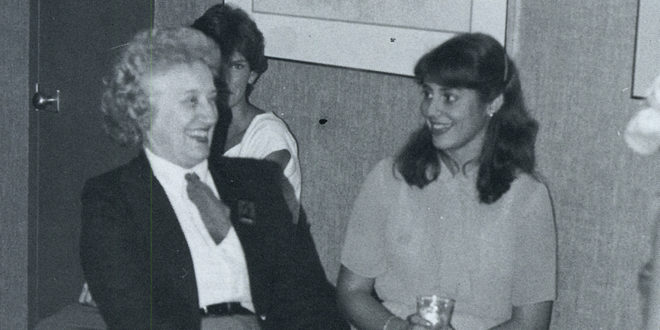 Imagine being asked to write about one or two of Dr. Frances Bartlett Kinne’s remarkable attributes. That assignment is comparable to being asked to describe only two aspects of a breathtakingly beautiful sunset. How does one select only one or two?

I worked beside and for Dr. Kinne from 1971 to 1984 and claim her as a mentor to this day, so I believe I know her well. She has influenced and aided my family and me throughout my career. Therefore, I feel confident in saying Dr. Kinne is indescribably remarkable in so many ways that it is difficult to find the words.

She clearly is an effective and empathetic leader, mainly because she has always been an intelligent, hardworking, creative and strategic thinker. This was true even when she was a child. And as a child, she was taught to be kind and thoughtful, which triggered her innate desire to help others whenever possible.

She genuinely cares for people and is highly engaging. In fact, she is one of the most caring people I have ever met. I believe that a major motivation for her success in everything she has done was because of her desire to improve situations and possibilities for others, to hopefully affect and improve their lives. This was true whether she was working with soldiers during the World War II years, teaching students at Jacksonville University, leading the College of Fine Arts at JU, leading Jacksonville University as the first woman president in Florida, or leading the Jacksonville Rotary Club as the first female President in their history.

Because of her caring heart, she often has reached out to people during difficult times or times of crisis and need. She never wanted to be publicly acknowledged for any of the help she provided. Whether she offered extra time, advice, influence or monetary aid, it was not for recognition, but done only out of love. Her lifetime of caring for others is demonstrated best by the enormous number of former students and colleagues who continue to stay in touch with Dr. Kinne because they experienced her love and understanding.

Some might confuse this caring, positive outlook and enthusiasm with a type of giddy happiness, but they would be wrong. She has an optimism that sees challenges as opportunities. She has operated successfully all of her life by grabbing those opportunities and proceeding with tremendous energy.

However, I have seen her angry, though rarely, and the anger is more a disappointment not in someone, but for someone.

There was a time when she had to let a significant employee go. She was angry with what this person did, and disappointed for this employee. Dr. Kinne handled the situation with great care. She always stands up for her principles and is a very strong person, but she also is consistently very compassionate.

This person came back years later and apologized for the bad decisions causing the firing, and has stayed in touch with Dr. Kinne to this day. I saw it happen with others who left under unfortunate circumstances that were handled with care and understanding by a gracious President Kinne. Her example influenced me and others who went on to positions of influence at other universities.

To me and many others, Dr. Kinne is the most energetic and positive person we know. Because I worked with her closely as her Academic Vice President for four years, I experienced her “stick-to-it,” “don’t give up on a good idea” attitude. She definitely does not give up. Because she is so positive — never negative, she is very convincing. Although, as I said previously, she is as tender as a cuddly puppy, she also is as tenacious as a fierce bulldog.

This worked well during fundraising. She often joked that some donors came through because they wanted her to stop pursuing them. It is very difficult to say no to her, and remember, she is tenacious. Her ideals were clear to all those who worked with her, including the Board of Trustees, and she would fight to achieve those goals in the most positive manner possible. I learned a lot during those years.

I can remember, during my first year at JU in the early ‘70s, we had a much smaller endowment, and it made us more dependent on tuition than we wanted to be. As a young biology professor, I wondered why so much of our endowment was restricted to use for scholarships in the fine arts. I asked, “Why is that?” The quick response was, “You haven’t met Dr. Fran Kinne yet.”

Even in her early years at JU as a professor and as Dean of the College of Fine Arts, she had the knack for fundraising. Her talent is partly due to her effectiveness in communicating, which paid off later in terms of her raising money for the entire University.

Although her vice presidents in the early ‘80s were all some 20 years younger than Dr. Kinne (they did not know it at the time), we all had trouble keeping up with her energetic pace. To this day, she is still the last person to leave an event. Back then, when one of us had a new idea or approach, she and I often had discussions late at night on the phone. Both of us considered ourselves “night owls” and did not mind calls up until 11 p.m. Calls after that time were saved for emergencies. Some of those conversations resulted in the University adding such programs as the School of Nursing and the Aviation Program.

While I was Dr. Kinne’s Academic Vice President, I saw how effective and engaging she was in a team setting, and how she could inspire others to keep doing more and to continue improving. In the late ‘70s, we had begun recruiting for a dean for our planned School of Nursing. Dr. Ruth Stiehl, a highly respected Florida Board of Nursing official in charge of accrediting nursing programs statewide, came to visit before we started the school. We met with her, and she was impressed with our plans for the school.

Dr. Kinne suggested we try to hire her, a bold move. I offered Dr. Stiehl the position, and she said no. Dr. Kinne said to try it again. We made the offer a second time, and a third time, and finally convinced her to come. She became the founding dean of our School of Nursing. Because Dr. Stiehl was our dean, we were accredited faster and earlier than any other start-up program like ours in Florida. Why was that? It was because Dr. Stiehl was very tough, and made sure we did everything the right way in order to get accredited.

The preceding describes some of my thoughts about Dr. Frances Bartlett Kinne, her leadership, her character, her personality (which has captivated so many, including celebrities throughout the years), her energy, her intelligence, and her perseverance that really was a catalyst for progress at the University.

This was supposed to be a short piece, so I will attempt to finish this insurmountable task. But, in closing, let me borrow from Elizabeth Barrett Browning, by saying: “Fran Kinne: ‘How do I love thee? Let me count the ways.” Impossible!

Dr. John Trainer is a former Biology Professor, Senior Campaign Officer and Academic Vice President for Jacksonville University. He is also former Director of The Bolles School in Jacksonville, former President of Lenoir-Rhyne College in Hickory, N.C., and former President of the Georgia Foundation of Independent Colleges. His late father, Dr. John Trainer Sr., was a 40-year Biology Professor at Muhlenberg College in Pennsylvania.