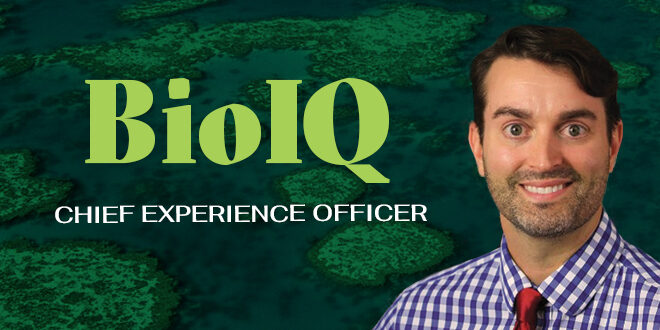 Early in his nursing career, Ashley Reynolds, PhD, RN, ACSM-HFS ’06 began to notice a trend that would change the trajectory of his healthcare profession.

“As a nurse working in the ER, ICU [intensive care unit], and CCU [critical care unit], I often spent time caring for patients who were suffering at the end of a lifetime of bad decisions,” he recalled. “It was then that I started to wonder how different things might be if, instead of focusing almost exclusively on reactive care and disease management, we put more emphasis on proactively driving patient health and wellness to avoid those health issues in the first place.”

Fast forward 26 years and Reynolds is now a driving force behind creating a healthier population through motivating behavior change. Last October he was named Chief Experience Officer at BioIQ, a healthcare engagement platform company that is redefining the way payers, employers, and consumers navigate and connect with the U.S. healthcare system. “We are a health technology platform company that provides access to a network of screening opportunities for people to complete preventive care that is easy and convenient for them,” he said.

Reynolds, who has served as an adjunct professor at JU, is responsible for BioIQ’s Human Resources, Internal Operations, the Experience Center/Customer Support Team, Vendor Management, and Quality Improvement. He also sits on the company’s clinical advisory board.

“I’m responsible for anything that touches the member experience or our internal employee experience,” he noted. “I’m heavily involved in creating customer engagement experiences in partnership with our technology team to help drive the best member experience possible. That can include crafting messaging and analyzing a population to determine what messages would motivate someone to take a particular action, for example. We are building some really cool stuff with AI [artificial intelligence] and predictive modeling to identify how best to interact with a person and what would best motivate him or her to take the action we’re trying to get them to do.”

BioIQs customers include healthcare companies, some employers, but mostly health plans. According to the Centers for Disease Control (CDC), six out of 10 Americans live with at least one chronic disease—heart disease and stroke, cancer, or diabetes, for example. These chronic diseases are the leading causes of death and disability in the U.S. and are also a leading contributor to healthcare costs.

Fortunately, most chronic diseases can be prevented by eating well, being physically active, avoiding tobacco and excessive drinking, and getting regular health screenings.

“Health insurers are keenly interested in making sure that people get their preventive care because it’s far less expensive than the alternative,” stressed Reynolds. “Health plans use BioIQ to help engage their population to motivate them to take particular actions to improve their health. Our platform is unique in the industry in that it comes with all of these different integrated digital tools, in a very well-defined consumer experience, connected to a network of opportunities for health screenings.”

Receiving a test kit in the home, finding a nearby retail point-of-care testing environment, downloading and receiving vouchers, or going to a retail store or pharmacy to get preventive screenings, including immunizations, are some of the ways BioIQ makes getting health screenings effortless.

“We make it easy—we tell people exactly what they need to do and why it’s important to do it, and then we provide them guidance to get to that screening, to get them to that health behavior that we’re trying to elicit,” Reynolds added. “We’re a rapidly growing company. We expect to be very successful this year.”

Reynolds began his healthcare career as a Hospital Corpsman in the U.S. Navy. After his military service, he became an EMT, then got his AA, and became a nurse. He knew he wanted to further his education and JU became his top choice.

“Being a Jacksonville native, I’ve always had a great deal of respect for JU,” he said. “The school has an amazing, well-known nursing program, so I knew it was the one for me.” Reynolds received a combination BSN and Masters in Nursing Administration in 2006. “I’m very proud that a great deal of my education was right here in my hometown,” he beamed.

After graduating from JU’s Keigwin School of Nursing, Reynolds moved into disease management, working with health plans on national quality improvement initiatives. He continued increasing his level of responsibility moving from director to regional manager to senior director at several different companies.

Right before joining BioIQ, he was COO and then CEO at Kaviva, a digital health engagement technology company. As he was working his way up the corporate healthcare ladder, he also became a certified health and fitness specialist by the American College of Sports Medicine (ACSM-HFS) and went on to receive his PhD in nursing science, with a minor in health behavior from the University of Florida.

“The focus of my doctoral research was digital health and how it can be used to change patient behaviors. I studied health engagement tools and age-related differences in their adoption,” he said. “My research armed me with a keen understanding of what’s required to build health technologies that appeal to different generations—from elderly patients to millennials.”

While his research background on health technology and how it can be used to motivate behavior change aligns with the intellectual side of his job, Reynolds says he draws on his education and experiences from JU for the administrative part of his role. “JU gave me that solid foundation I needed to flourish as a leader,” he said. “I have a strong ethic when it comes to coaching, growing, and mentoring talent. All these attributes really stem from the educational foundation and the experiential education I received at JU.”

When asked what made his JU experience particularly special he cites classroom discussions between professors and students as a highlight.

“Classrooms weren’t packed like you see in larger universities. It felt more intimate and allowed for free-flowing discussion where ideas could be challenged,” said Reynolds. “Those discussions really helped me grow those critical thinking skills that have carried me through progressively responsible positions all the way up to the chief executive role.”

Reynolds’ love for Jacksonville shines through when you ask him about the future of his hometown. “When you have a strong connection to this city like I do as a native, it only makes sense to try to do more to make it the place that you’d love it to be,” he enthused. “To be perfectly honest with you, I see no reason why Jacksonville can’t be another Austin, TX, or some other tech hub like in California. I would love to see Jacksonville become a health technology mecca. We have the talent, the education, and we have a pipeline of great students and people who have wonderful ideas.”

For his part, Reynolds plans to participate in local efforts to boost Jacksonville’s health technology presence and to participate in incubating new and fresh ideas coming out of our local universities. His passion for improving populations through the use of health technology, along with the university that helped him hone his leadership skills, will certainly shine a light on Jacksonville’s true potential.