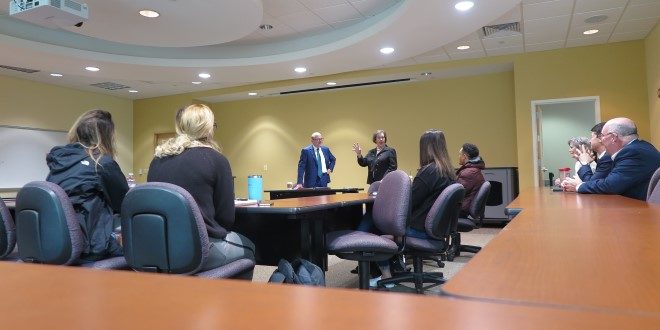 Mr. Storch, the first presidentially appointed and Senate-confirmed NSA IG, assumed his duties in January 2018. He immediately began working toward releasing as much non-classified NSA information as he possibly could.

“Our goal is to be as transparent as possible in informing people about the work of the NSA OIG in conducting effective, independent oversight over the Agency,” Mr. Storch said in a press release in October 2018 announcing the launch of the NSA IG’s new website.

This week, Mr. Storch told students of Professor Sandra Dean’s Executive Communication class that he holds listening sessions now to build rapport and relationships.  He also said he sends notes ahead of time to people who are involved in audits, inspections or investigations. They can review issues, which allows him to approach them as a listener.

He also emphasized the importance of the government’s whistleblower program, particularly as it relates to NSA. The NSA IG website features a section on whistleblower rights and protections to help people feel comfortable coming forward if they have information about what they reasonably believe to be wrongdoing.

Before he joined NSA, Mr. Storch served during his time as Assistant IG as the first Department of Justice Whistleblower Ombudsman, where he helped establish and direct a program widely considered a leader in the Federal space. As a result, he organized and chaired an Office of Inspectors General Whistleblower Ombudsman Working Group.