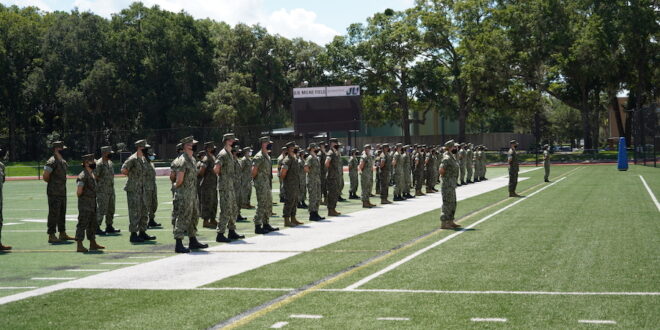 When the Jacksonville University Naval Reserve Officer Training Corps (NROTC) program welcomes its 50th anniversary class this fall, an impressive 30 of its 43 members will be National Scholarship recipients.

Given that Jacksonville University competes for NROTC students with at least 190 colleges and universities and the US military academies, that’s an impressive feat.

“JU NROTC is fighting and winning well above its weight class when it comes to enrolling NROTC national scholarship students,” says Capt. Glen Leverette, commander of the University’s NROTC program.  “I am very proud of the one-on-one individualized attention, support from local area commands and a family atmosphere that only JU’s NROTC program can provide.”

This year’s number of National Scholarship recipients supports that case. Each year, approximately 4,000 applicants are awarded 4-year National Scholarships that allow them to attend any of the 77 NROTC programs available through 190 colleges and universities, including the University of Florida, Florida State, Yale, Cornell, Texas A&M, Ohio State, Virginia Military Institute and The Citadel.

The National Scholarship recipients receive full tuition, books stipend, educational fees and other financial benefits. Upon graduation, midshipmen are commissioned as officers in the Navy or Marine Corps.

“We are very proud of this program under the leadership of Captain Leverette,” said Dean of the College of Arts & Sciences Dr. Matthew Corrigan. “With this great class coming in, it remains one of the elite Naval ROTC programs in the nation.”

The University’s NROTC program was founded at Harvard in 1971 and later moved to JU. In 49 years, the program has commissioned approximately 1,300 Navy and Marine Corps officers for service in military disciplines including surface warfare, submarine warfare, naval aviation, nursing, nuclear power and Marine Corps occupational specialties.

Jacksonville University is one of only five Florida universities that offer NROTC training. In 1972, JU became the first NROTC unit to enroll female Midshipmen when four women aspiring to be Navy officers joined the program.

As the largest single source of Navy and Marine Corps officers, the Navy ROTC Scholarship Program plays an important role in preparing young men and women for leadership and management positions in an increasingly technical Navy and Marine Corps, according to the US Navy.

“The competition for these students is intense to say the least,” says Capt. Leverette, who graduated from the US Naval Academy and holds a graduate degree from Jacksonville University. “I understand the positives of both programs. At the Naval Academy, I had a chance to meet with senior naval officers one-on-one maybe a handful of times in my four-year career there. At JU NROTC, we meet, train, educate and mentor our midshipmen daily.”

“In concert with our outstanding admissions department, support from the President, Provost and our awesome faculty, who also treat my NROTC students like family, we are attracting wonderful freshmen who want to grow, lead and develop within the JU academic and military training experience.”