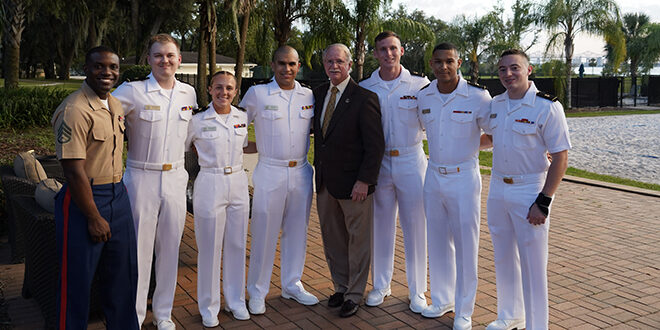 For 50 years, Jacksonville University’s Naval Reserve Officers Training Corps has been fortifying these qualities in its officer candidates, and on Saturday, Oct. 9, 2021, that proud heritage was honored with a special 50th anniversary ceremony at the River House. Complete with static displays of military vehicles, Mk 19 grenade launchers, and M2 .50 caliber machine guns, the event was a fitting tribute to a program of significance, not just for the university, but for the state of Florida and the nation as well.

“Ultimately, the NROTC program serves the people of the United States,” said Capt. Dan Gillen, JU NROTC commanding officer and professor of naval science. “Our program produces intelligent, physically fit and morally sound leaders who take the oath to protect our Constitution and our fellow Americans.”

Reflective of the university’s long-standing support of military service members and veterans, the NROTC anniversary received special billing during this year’s Homecoming and Family Weekend. The event included an open house at the NROTC unit followed by more formal ceremonies at the River House and a fundraising dinner to support the Tillie K. Fowler NROTC scholarship fund. Guests of honor included Florida Congressman John Rutherford, Jacksonville University President Tim Cost and distinguished alumni, one of whom was retired Navy Capt. and current director of Jacksonville University’s School of Aviation and Military Sciences Matt Tuohy.

As one of the university’s 18 inaugural NROTC scholarship students, Tuohy has witnessed its development first-hand.  “The NROTC program started me on the path to my 27-year naval career and the 20 years since my retirement from active duty,” Tuohy said. “The NROTC program and my degree from JU established the foundation that I was able to build on over the last 50 years. The staff of the unit were my first mentors and examples of what a Navy officer should be.”

On Sept. 23, 1971, Jacksonville University’s NROTC unit became the first to be formally dedicated in the state of Florida.  A year later, in August 1972, it was selected by Secretary of the Navy John Chaffee to become the first in the country to admit female midshipmen. Today, it is one of 63 Navy ROTC units hosted at 77 schools throughout the United States, and just as the Navy itself has evolved, so has the JU NROTC program.

Originally located in a wooden building on the site of what would become the Davis College of Business, the unit is now housed in the Tillie K. Fowler building. Over the years, it has added state-of-the-art equipment, including a Conning Officer Virtual Environment system, which allows midshipmen to develop open-water navigational skills; a flight simulator; a training center featuring a Marine Corps certified obstacle course; and hundreds of midshipmen who have gone on to successful careers in the Navy and Marine Corps.

By 2014, the JU program had become one of the largest in the nation, but despite its size and success, it has remained dedicated to the development of each and every midshipman. In keeping with the culture of the university as whole, this is an environment where midshipmen receive individual encouragement and attention, and where servicemembers and veterans have always been welcome.

Voted a Military Friendly campus by G.I. Jobs Magazine, Jacksonville University has been reaching out to the military throughout its history. From welcoming sailors and soldiers after World War II, to designating the Defenders’ Den as a special center for student-veterans, to establishing numerous scholarships for veterans and their family members, the university continues to strengthen its military ties, and this is evident throughout its NROTC program.

“The support we receive from our host institution is nothing short of incredible,” Gillen said. “We are certainly integrated into university operations, and a large number of our NROTC students are active university athletes, members of the Student Government Association, and a number of other campus-related programs. One unique benefit that Jacksonville University provides is a room and board scholarship awarded by the university to students who receive the NROTC national scholarship.”

There are two pathways to the NROTC. Candidates can join through the Navy or Marine Corps national scholarship programs or through the advanced standing/college program. Each program has its own set of eligibility requirements, but the goal is the same – to imbue young men and women with the highest ideals of naval service and to prepare them for leadership positions in an increasingly technical Navy and Marine Corps climate.

According to Gillen, the impact of technology cannot be overstated. “The most significant difference that we face is our current and future operating environment.  Technology is widespread, and our adversaries have access to these systems. No matter what their job is in the Navy and Marine Corps, naval officers must understand the latest technologies and know how to use them to our advantage.”

Thankfully, the high caliber midshipmen admitted to the JU NROTC program are rising to that challenge. “We firmly believe that our students are some of the best that the country has to offer,” Gillen added. “And we work tirelessly to ensure that once they graduate and commission for military service, they are fully prepared for the rigors that come with that lifestyle.”

Once upon a time, a young Matt Tuohy was one of those midshipmen, and along with his fellow midshipmen, he participated in the first commissioning ceremony in JU NROTC history. The commissioning is a formal event that marks the transition from midshipman to commissioned officer. Full of symbolism, it is the moment an officer is recognized as such, and a memory most hold dear. Tuohy remembers his well.

“In the early days, we were such a small unit some of us got very close to the staff, Quartermaster Chief Rex Reed in particular. He was the first chief petty officer many of us encountered, and he set the bar VERY high for the chiefs we would work with in the fleet. At my graduation and commissioning ceremony, he gave each of us our first salute and received the customary silver dollar in return. Then, to the five or so of us who knew him best, he very respectfully, but forcefully, explained that now that we were ensigns, he would no longer use our first names, and the first one of us who called him ‘Rex’ and not ‘Chief’ … would be very sorry!”

Fifty years and many commissioning ceremonies later, Jacksonville University’s NROTC program has embraced its advancements as much as it has honored its traditions. There is still the respect conveyed with a single salute, the pride displayed in a uniform, the patriotism that beats in the hearts of those willing to serve.

“We are incredibly proud of the legacy of the unit,” Gillen said. “For 50 years, we have produced just over 1,500 Navy ensigns and Marine Corps second lieutenants who willingly raise their right hand, take the oath of office and offer to go into harm’s way on behalf of our nation. Our legacy is one of the things that challenges us to pursue excellence so that those who come after us inherit a unit that makes them proud.“