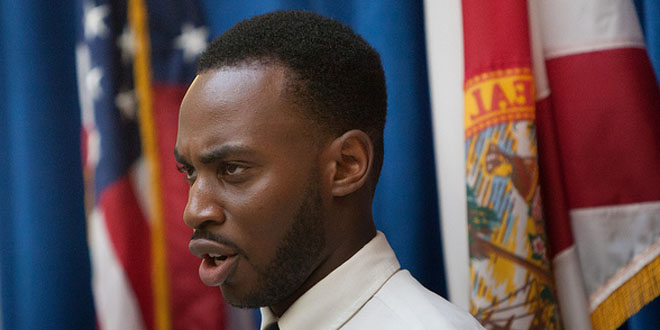 Cyriac Adjevi-Neglokpe performs "Music for a While" from Oedipus

It’s the summer of 1984. The crowds in Jacksonville totaled 45,000 during Michael Jackson’s Victory Tour. Jacksonville University (JU) freshman Cyriac Adjevi-Neglokpe missed that concert. He hadn’t been born yet.

Picture the moment. Thirty-four years ago. Thousands of Jackson fans paid $30 to enter the Gator Bowl, some slipping in after the concert began for less. During one of three concerts that July, the King of Pop made an unexpected announcement. He would donate $100,000 to the city of Jacksonville. Why? To establish a trust fund in support of students pursuing education in music.

In December, Cyriac became a part of that elite group. Fewer than 60 scholarships since 1988. This year, students represent four different Jacksonville colleges. Each received $1,375 from the Jacksons’ Music Scholarship Fund for musical pursuits. Funds are paid from the interest of the initial gift and administered by the Kids Hope Alliance.

Cyriac and his fellow recipients also performed at City Hall. Mayor Lenny Curry, CEO of the Kids Hope Alliance Joe Pepper, school officials, and other city representatives attended. “My experience at City Hall was interesting. That was my first time there. I never realized how huge the rotunda was and how great the acoustics were in the hall. It was a great experience performing in front of the mayor.”

His mother, older brother Loic, and Dr. Tim Snyder, Dean of JU’s Linda Berry Stein College of Fine Arts attended the ceremony. Cyriac performed “Music for a While” by Henry Purcell. The second of four movements from Purcell’s incidental music of Oedipus, it was written for countertenors. A vocal range Jackson would likely admire.

“I was born in Togo, West Africa and moved here when I was just a baby,” Cyriac said. Also a graduate from local, nationally-acclaimed high school Douglas Anderson School of the Arts, he is no stranger to the stage.

“My childhood dream was to become a famous TV star or athlete. But what motivated me to pursue music were my older siblings. Their passion, commitment, and consistency, and just how far you could go with it.”

And how far does Cyriac hope to go within the industry? He says that his immediate plans include an internship at a local high school vocal department. “My long-term plan is graduate school and studying music therapy.”

Though he sang the lyrics “music, music for a while,” he considers this a beginning, not an end. Already a Jackson fan, he loves the 1987 hit “Man in the Mirror.” It draws inspiration from faith, family, and helping others, much like Cyriac does. As the song suggests: “If you want to make the world a better place, take a look at yourself and then make a change.”

And that’s exactly what this JU freshman plans to do.