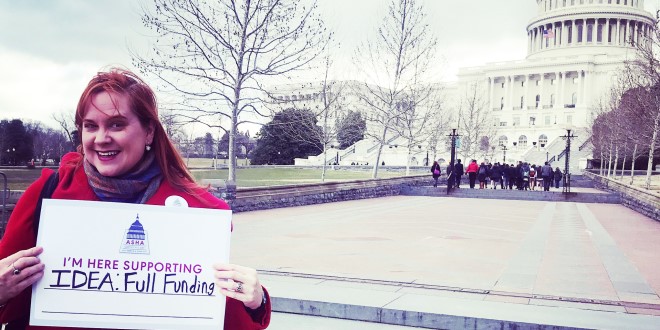 Federal funding for educating students with disabilities was introduced by lawmakers late last month. Thanks to the efforts of special education advocates, additional funding for children in need of speech, language, swallowing, and hearing therapy may soon become a reality.

Over 120 speech-language pathologists, audiologists, and students met their members of Congress or staff. Dr. Edge spoke with key staff from the offices of Senator Marco Rubio, Senator Scott, Rep. Al Lawson, and Rep. Vern Buchanan to discuss increased funding which includes speech pathology services to K-12 students. An issue with a long history.

In 1975, the Individuals with Disabilities Education Act (IDEA) passed with an original commitment from Congress to pay 40 percent of costs. More than four decades later, the federal government is footing less than 15 percent of those costs. Edge is hopeful that, under the IDEA Full Funding Act, such disparaging numbers are about to change.

Rep. Jared Huffman (Dem.-Calif.) introduced the measure (HR 1878) and said passage of the bill would affect everything from teacher pay to class size to much-loved resource classes including music, art, and physical education. “That’s why the bipartisan IDEA Full Funding Act to finally honor the IDEA promise is probably the most significant thing the federal government can do to support K-12 schools,” he said in late March.

Much debate and angst has surrounded the issue since President Donald Trump’s initial budget proposal included the elimination of Special Olympics funding. Since that time, the dialogue between U.S. Education Secretary Betsy DeVos and Trump has been fodder for a social media outcry.

Edge, who came to JU from the University of Mississippi, joined the Brooks Rehabilitation College of Healthcare Sciences (BRCHS) in 2014. Now, she adds “advocate” to her roles as a faculty member and Study Abroad coordinator for BRCHS. She will serve a three-year term on the ASHA Advisory Council for Florida, ending in 2021.

The Advisory Council, Edge said, works to bring state issues and concerns to the national level. She cites the Kids Share 2018 Report on Federal Expenditures on Children produced by the Urban Institute, which states that by 2020, the federal government is projected to spend more on national debt interest payments than on children. That drop in funding works out to less than seven percent of the U.S. budget being invested in children, including those with speech disorders and other medical limitations. Seven percent of a budget to serve 25 percent of the American population.

“Seven percent of a budget will never cover the needs of children with special needs regarding access to curriculum and becoming contributing members of society. These students require full funding to better support their educational needs, which may include additional services. Among those are speech and language therapy, occupational therapy, physical therapy, vision therapy, audiological services, exceptional education support personnel, and lower student-to-teacher ratios.”

Edge and other ASHA representatives also asked lawmakers to consider comprehensive coverage and equitable reimbursement for speech-language pathology and audiology services by Medicare, Medicaid, and other third party payers. “One specific ask to Florida legislators,” she said, “included separating the per patient combined limit of $3000 speech-language pathology shares with physical therapy in Medicare Part B coverage. This combined approach to SLP/PT coverage limits direct access to services for Medicare patients.”

Moving the Needle for IDEA

For Edge, next steps involve ASHA’s Political Action Committee and other efforts to keep ASHA’s legislative priorities in the forefront of legislators’ minds. “I will also spend the next year educating JU students and my speech-language pathologist colleagues throughout Florida about how to become involved and advocate for these very important issues.”

Visit Jacksonville University online for more details about the Brooks Rehabilitation College of Healthcare Sciences and the Master of Science in Speech-Language Pathology Program (MS-SLP).