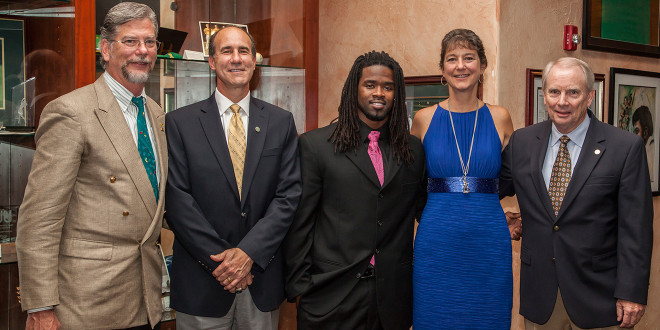 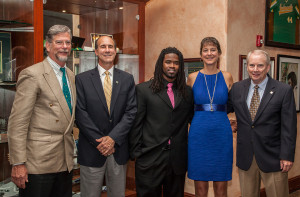 “We are very excited to induct this class,” said JU Athletics Hall of Fame Committee Chairman Brad Negaard (JU Hall of Fame ‘93). “It includes individuals who have brought honor to Jacksonville … Each one of the inductees has had a significant impact on the history of Jacksonville University Athletics, and as a Hall of Fame member, I am honored to have them join us.”

Barker played basketball for two seasons from 1948-50. He led the team to a 17-1 record in 1949 and a 24-3 record in 1950, when the team advanced to the National Junior College Tournament. After averaging better than 25 points in the tournamet, he finished as the Dolphins’ career scoring leader. Barker also owned the single-game scoring mark and the single-season scoring mark. His 485 points during his final season established a new single-season mark for the state’s junior colleges at the time. Barker has been a director of Aradigm Corp. since May 1999. From January 1980 to January 1994, he served as a company group chairman of Johnson & Johnson Inc., and was Corporate Vice President from 1989 to his retirement in 1996.

A member of the JU baseball team from 1974-77, Rausch completed his career as the Dolphins’ all-time leader in games played, at-bats, hits, runs, doubles, RBI, walks and total bases. More than three decades later he still ranks among the top 10 in a number of the same statistical categories. After setting a JU mark with a .411 average and 68 RBI in 1977, he was a 10th-round draft selection of the Cleveland Indians.

A two-time First Team All-Pioneer Football League honoree, Shell was a cornerback and return specialist for the Dolphins from 1999-02. JU’s single-season record holder for interceptions and pass break-ups, he also holds the program record for punt return average at 13.1 yards a return, while ranking among the all-time leaders in several other return categories. Following his record-setting career with the Dolphins, Shell continued his professional career with stops in the AFL, NFL Europe and most recently the CFL

A charter member of the Jacksonville Rowing Club, Negaard O’Brien has enjoyed a long career as a competitor and coach. She competed for JU as a student, beginning as a freshman in 1977, and went on to win multiple State and Southern Championships throughout her four years, including an invitation to the Olympic Trials. O’Brien made the transition to the coaching side and led the JU women’s program to national prominence during her time as coach from 1987-1989, including earning a bronze medal, and went on to serve on the Olympic Rowing Committee, helping select the athletes and coaches for the national teams. Since 2001, O’Brien has been the coach of the non-profit Fitch Crew Club, helping to continue growing the sport of rowing by working with area students and adults.

A 1967 Jacksonville University alumnus, Harrison has been a JU Trustee since 2004. As chair of the Athletics Committee for many years and also a member of the Buildings & Grounds and Strategic Planning committees, Harrison has helped raise millions of dollars for JU Athletics and other programs, and he was instrumental in bringing lacrosse and varsity sailing to JU. He is a JU Distinguished Alumni and was JU’s honoree at the 2012 First Coast National Philanthropy Day event. Harrison is president of Harrison & Co. in Jacksonville, former chairman and CEO of Direct Market Concepts, and past chairman of the Gator Bowl Association board of directors.