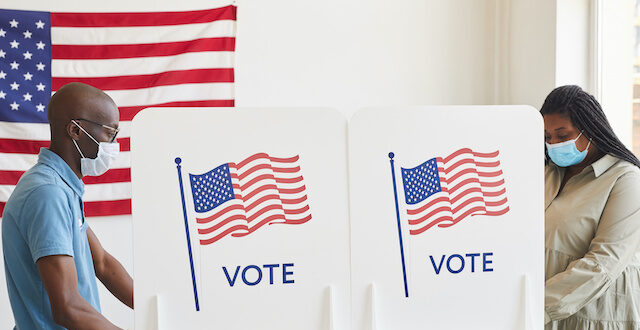 New Research Calculates Difficulty of Voting in Each State

With the Nov. 3 presidential election just around the corner, a new analysis identifies U.S. states that make it easiest, and those that make it more challenging, to register and vote.

Political scientists Dr. Michael J. Pomante II of Jacksonville University, Dr. Scot Schraufnagel of Northern Illinois University, and Dr. Quan Li of Wuhan University in China, recently updated their Cost of Voting Index to reflect a host of new state laws in place for the 2020 election. The analysis is published online ahead of print in Election Law Journal: Rules, Politics, and Policy.

Voting laws vary widely from one state to another and change frequently. The index uses an assemblage of dozens of current election laws to rank each state according to the time and effort it takes to vote in U.S. presidential elections. Importantly, both stages of the voting process—registering to vote and casting a ballot—are combined into a single index value.

“Voting and elections are at the heart of our democracy, and voting should be easy,” says Dr. Schraufnagel, the study’s lead author. “One characteristic that helps define the competency of an electoral system and the legitimacy of governing institutions is the ease in which you can cast a ballot.”

States with more restrictions have higher cost-of-voting scores and lower rankings for ease of vote. Improving the ease of voting nationwide potentially could bump presidential election turnout from an average of about 55 percent to more than 65 percent, Dr. Schraufnagel says.

“State policies that impact the cost of voting are not the only factors that influence turnout, but they are arguably the most efficient way to alter the overall difficulty of voting for citizens, which is a major reason why we see variations in turnout from state to state,” adds Dr. Michael Pomante, who specializes in voter behavior and teaches political science courses at JU’s College of Arts & Sciences as well as the JU Public Policy Institute.

As for those who claim that easing restrictions would result in widespread voter fraud, Dr. Schraufnagel says there is no systematic evidence from research that suggests ballot-stuffing or voter impersonation are major concerns.

“Because voter registration and balloting administration in a presidential election is so decentralized, it would be very difficult to sway a national election in our country by stuffing ballot boxes or casting fake votes,” he says. “A bigger issue is laws that disfranchise people, which cause democracy to be compromised. Research shows that politicians pay less attention to those who don’t participate in elections.”

Oregon takes top honors for making it easy on voters in 2020—followed by Washington, Utah, Illinois and Maryland. Factors that help make voting convenient include online voter registration, early voting, mail-in voting, being able to register as late as Election Day and automatic voter registration of citizens who are eligible to vote.

“Notably, among the top states, Oregon, Utah and Washington all have permanent vote-by-mail processes,” Dr. Schraufnagel says. “Illinois is among the group of states that make absentee voting very easy, although it’s not the same as mail-in voting.”

On the flipside, Texas is the state with the most restrictive voting processes, followed by Georgia, Missouri, Mississippi and Tennessee. Texas maintains an in-person voter registration deadline 30 days prior to Election Day, has reduced the number of polling stations in some parts of the state by more than 50 percent and has the most restrictive pre-registration law in the country, according to the analysis.

Other factors that make voters jump through more hoops in some states include strict voter ID laws, cumbersome absentee voting processes and a lack of early voting options.

The initial Cost of Voting Index, which examined two decades of data, was published in 2018. In recent years, the researchers have seen dynamic changes in voting laws. States that moved up considerably on the ease-of-vote ranking, by making concerted efforts to make the voting process more hassle-free, include Virginia, Michigan, Hawaii, Vermont, Ohio, New York, South Dakota, Washington, Illinois and Rhode Island.

Virginia’s move up the rankings was particularly dramatic. The state climbed 37 places and is now the 12th easiest state in which to vote. Specifically, Virginia’s state legislature approved an automatic voter registration law, got rid of the in-person registration deadline and made Election Day a state holiday, among other considerations.

Similarly, Michigan jumped up by 32 places in the ranking. In November 2018, voters there overwhelmingly approved eight changes to the state constitution making it easier to register and cast a ballot. “What is abundantly clear from the examples of Virginia and Michigan is that if a state wishes to make voting more accessible, it is entirely possible to do so,” Dr. Schraufnagel says.

“The primary reason why these states have seen the largest declines in rankings,” Dr. Pomante explains, “is they lack a willingness to modernize their policies to ease the difficultly of voting and stay current with election law trends we see in many other states.”

The authors note that some states made temporary changes to state election law in response to the COVID-19 pandemic. These provisional laws were not factored into the 2020 Cost of Voting Index, but they are taken into consideration in a separate index in the newly published report.

Because of concerns over possible illness transmission at polling places, four states (CA, NV, NJ and VT) and the District of Columbia adopted provisional vote-by-mail processes. Additionally, 15 states made absentee voting processes less restrictive. Had the pandemic-related changes been made permanent, some of those states would have improved their ease-of-vote rankings. Notably, California would have moved up four notches in the rankings, and Vermont would have moved up two places.

“Overall, our research offers a panoramic summation of how various institutional designs at the state level affect citizens’ chances of voting at the individual level,” says co-author Dr. Quan Li. “We believe our research not only sheds light on future electoral reforms, in particular, but also contributes to democracy studies in general.”