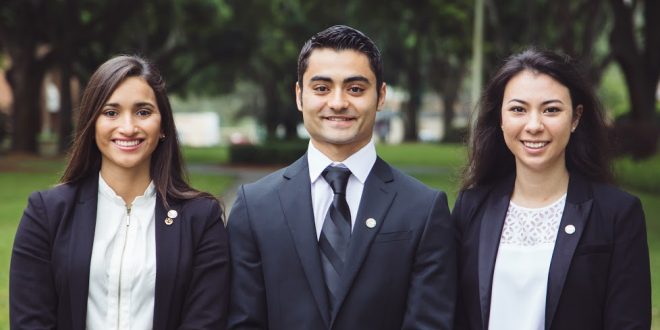 Three top 2016 graduates with strong academic and leadership records have joined the University as Presidential Fellows.

After a rigorous search that narrowed the field from numerous highly qualified candidates, Stephania Landaeta, Ryan Wagner and Kimberly Trumbull were selected. While their official start date is May 18, they have already jumped in with high energy, offering advice in meetings and taking on important roles at University events.

“These graduates have earned their new roles through impactful service, passionate leadership and high academic achievement,” said Diana Donovan, Director of the Office of the President.

Here’s a closer look at the 2016-17 Presidential Fellows:

RYAN WAGNER is graduating cum laude with a bachelor’s degree in Kinesiology from the Brooks Rehabilitation College of Healthcare Sciences. He was born and raised in Japan. Ryan has held many leadership positions on campus, including as president of Sigma Nu fraternity; president of the Kinesiology Student Society; treasurer for the Order of Omega Greek Honor Society; and treasurer, vice president and founding member of the National Honor Society of Leadership and Success. Ryan is passionate about the mechanics of human movement, and hopes to eventually become involved in the physical therapy industry. In his role as Fellow, he looks forward to inspiring students and enhancing their college experiences.

STEPHANIA LANDAETA is from Valencia, Venezuela. She is graduating with a double major in Accounting and International Business.  As a freshman, she was assigned as an event coordinator in the International Students Association, and in her sophomore and junior years she was voted vice president of the organization. These key positions led her to take other leadership roles, such as the Accounting Club treasurer, as a strong member of Delta Delta Delta and as part of the JU Varsity Shooting Team. She is passionate about the internal issues of the Venezuelan government, community service, crossfit, diversity and accounting. As a Fellow, Stephania is looking forward to being highly motivated, self-disciplined and reliable.