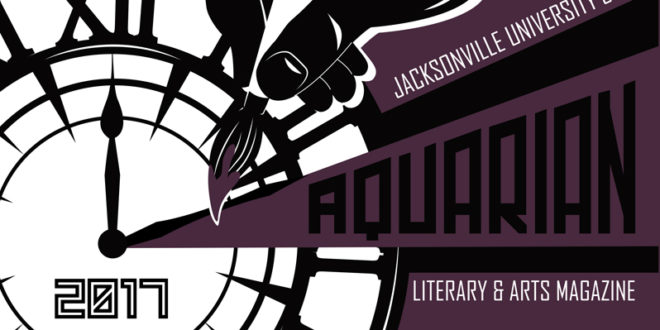 A new age of Aquarian as national notice rolls in

When you pick up an Aquarian, you can’t help noticing the remarkable imagery and captivating words.

National judges are picking up on that, too.

In one recent honor, the literary and arts magazine for Jacksonville University was one of only 32 finalists in the Associated College Press’ annual Pacemaker competition. (See artwork examples in gallery below.)

“The Pacemaker is the association’s preeminent award,” Laura Widmer, executive director, said in a news release. “ACP is honored to recognize the best of the best.”

In all, 105 student magazines entered the Pacemaker competition, which sheds national light on the winners. A team of judges studied every entry, discussing its strengths and weaknesses.

“The Pacemaker winning magazines were incredible and could hold their own on the newsstand in the company of the very best professionally produced magazines,” the judges said.

In his Editor’s Note for the 2017 Aquarian, Wallace challenges the notion that all of the best art and literature created is behind us.

“When I was young, a teacher told me that all the great works of literature were already written, and that the most beautiful art was hanging in a gallery. That teacher believed that my generation exists to quote and cite, that everything worth saying has been said and everything worth immortalizing has been immortalized. On behalf of the Aquarian staff and contributors, I present our most ardent rebuttal,” he writes.

JU students are encouraged to submit their creative works to the Aquarian. Contributors send in up to five entries per media, as long as they are original works and the rights are not held by another publication. The idea behind the long-running magazine is to showcase the extraordinary work of the students in all forms.

For judging in the most recent annual Pacemaker contest, the magazines were divided into two major categories — feature and literary art. Whether the magazine was produced at a four-year or two-year school was also taken into consideration.

“The quality of the magazines produced at the collegiate level is amazing,” added Gary Lundgren, associate director. “The storytelling is remarkable with a great blend of shorter quick-reads and substantial long-form stories in the feature magazines.”

Through education training and recognition programs for members, the Associated Collegiate Press promotes the standards and ethics of good journalism as accepted and practiced by print, broadcast and electronic media in the United States.

The report contains material provided by the Associated Collegiate Press.