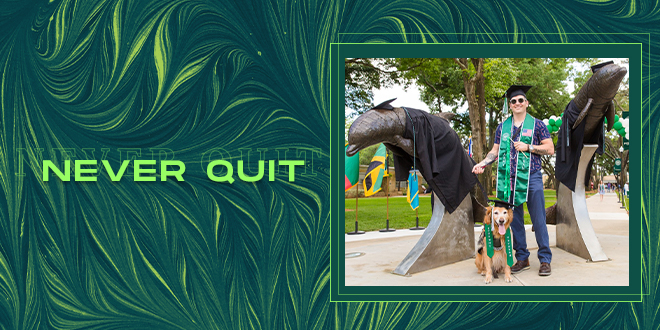 Never Quit: Discovering how my successful struggle is beginning to pay academic dividends

This is the first installment of “Never Quit,” a blog by Stephen Eager, a student-veteran enrolled at the Public Policy Institute, who recently earned his Bachelor’s degree from Jacksonville University. Stephen is currently studying to obtain a Master’s in Public Policy while battling both military trauma and an exacerbated learning disability. These blogs, which will run occasionally throughout the academic year, describe how he has overcome adversity and is achieving his goals.

I walk into the classroom at 2800 University Boulevard, home to Jacksonville University’s Public Policy Institute. I take a seat and begin to look around. I take in the scent of freshly copied paper and the subtle aroma of coffee while also noticing the 25 other members of my cohort. I try to convince myself that I am not here by mistake, although making it this far in academia has been the most consequential struggle of my life.

As I begin to observe my fellow policy grad students, I am taken in by their elegance. Each member of the class is dressed for success, and many are coming to school from their office buildings in the downtown public sector of the city.

My negativity begins to set in and I think to myself, “Am I in the right place? Do I deserve to be among the most propitious policy leaders at the one and only Public Policy Institute in all of Florida?”

Just then, my wandering mind is interrupted by the door slamming open and in walking this loud, full of life, 5-foot-5-inch tall man. He immediately extends his hand and says, “Hi, pleased to meet you, Glen Leverette here!” I recognize him as Capt. Leverette, JU’s Navy ROTC commanding officer.

Now I know I must be in the wrong place and with the wrong crew.

In any event, I quickly realize that if I am to walk across the Dolphin Green in two years and receive that Masters in Public Policy degree, I have my work cut out for me.

If there were ever a tune written that I can relate to concerning my childhood home, it would be the Barenaked Ladies hit song, “Old Apartment.” Although I have a few good memories of the old quadruplex building owned and operated by the city’s housing authority, most others still haunt me today.

For instance, there’s the memory of my sister leaving home for school never to return. An incident involving her, a pair of scissors, and a classmate’s throat ended with her declared mentally insane and she was whisked away in a straitjacket to the Metropolitan State Hospital the local asylum in our Boston suburban town, where it was realized she was a few cans short of a six-pack – excuse the expression. But, research does confirm that more than 11 years of sexual and physical abuse – from a parent no less – will do that to a child.

Needless to say, my dad was asked to move out, but not before his final temper tantrum launched me, a six-month-old baby at the time, across the living room floor. It could most fairly be argued that our living conditions at 20 Gormans Court were threatening at best.

But one must not blame my dad; after all, he did have it worse than us when we were growing up. At just 6-years-old, he was lit on fire by his dad. Unlike my father, who took his own life a few years after moving out, Jim Eager I lived to abuse my dad for many years after.

Looking back today, that old apartment is nothing but a dark and scary place, where the scenes of misery have since been covered up.

There is a ton of research that suggests learning difficulties can be directly related to the environment to which a student lives. These social scientists may be on to something. Dad was illiterate, and my mother dropped out of school before the 10th grade. Fast forward to my childhood, the trend continues – in kindergarten – where I was diagnosed with an “unspecified learning disability.”

Although the passing of my father happened before grade school, the financial ruins of my family and the trauma that existed remained an obstacle to success. Social strife led to learning difficulties, which led to being classified as a SPED, which led to harsh bullying from the other students. And it all started on day one.

I remember my first day of school as if it were yesterday.

I entered the classroom, and like any 7-year-old, I headed for the toys. He-Man is the thing at the time. Mrs. Robins has a fully quipped Grayskull Castle, complete will all the figures.

As I begin to use my imagination and play with the figures, a different, much tougher-looking teacher saunters in.

Little did I know that I am being removed from the other students – a form of isolation if you will – and it lasts the remaining 12 years of my scholastic life. From this day forward, I am known as a “SPED (which stands for Special Education),” or so faculty and students alike, refer to me. Although I receive a lifetime of bullying, my harshest critic becomes myself.

While in the resource room (as it was called in those days), challenging subjects such as math and social studies were replaced with more mundane tasks such as learning how to take care of the class goldfish. Since our minds were somehow less advanced than the normal students, liberal arts subjects were replaced with games of chess and monopoly, or if we had a really good week we could play hangman.

Once I reach middle school, I decide I am done with the labels and done with the isolated treatment. It is my desire to be treated as equal to the other pupils. So, as any level-headed 12-year-old does, I argue with my teachers. But my feud is met with disaccord.

“No, you can’t handle a full load of regular-level classes,” Mrs. Cox, my middle school “SPED” teacher says.  “But, I will put you in one regular class. One thing you seem to do well is write.”

“Okay,” I think to myself. It must be better than nothing. I go off to writing class and it seems to be my only niche, thus far. But I am determined to do more. After all, I plan to save the world – whatever that means.

My senior year in high school comes and the only plan I have ever known is to join the military – Navy, to be exact. But that dream quickly starts to fade, and I begin to wonder if a military career is meant to be.

I cannot for the life of me pass the standardized Armed Services Vocational Aptitude Battery (ASVAB) test. My first three attempts are annoying enough, but the problem I face is the fact that it takes me nine times of taking the exam to finally pass. The math is tough. The exam is asking for me to do word problems and perform operations that I have never been taught! I fail the ASVAB eight times.

I begin to study night and day. Nobody is around to offer me a hand and most are saying that I am beyond their ability to properly tutor me. So, I prep alone, and I work hard at it.

On the ninth try, three years since my first ASVAB attempt, I pass, but it isn’t good enough for the Navy. So, the Army it is! My final score is 31. The Army requires only a 30 at the time – since 9/11 just happened and they need recruits now.

My life up until this point is one of perseverance and tenacity. Overcoming a life full of struggle is tough, and by statistical data, I am destined to be an eventual drug addict, child abuser, and narcissist like my father before me. But I chose to embrace the struggle and work toward a more challenging goal – and my entry into this world’s greatest Army, is by far, the first sign that my hard work paying off.