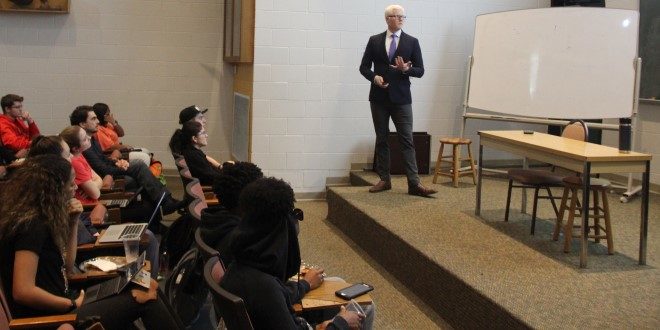 Math might be everywhere, but how do you use it to make a difference?

That’s the question Dr. Tyler Kloefkorn tried to answer for students and faculty who attended the most recent Science and Engineering Lecture Series (SELS) event.

“It’s my job to connect mathematics to national issues and advocate for statistics in the public policy realm,” said Dr. Kloefkorn, who as a program officer at the National Academies of Sciences, Engineering, and Medicine works for the Board on Mathematical Sciences and Analytics and as director of the Committee on Applied and Theoretical Statistics.

The National Academies of Sciences, Engineering, and Medicine provide nonpartisan, objective guidance for decision-makers on pressing issues. Founded in 1863, the Academies marshal the energy and intellect of the nation’s critical thinkers to respond to policy with science, engineering, and medicine at their core with studies, workshops, forums and other activities.

“Mathematicians often have a hard time making a compelling case that justifies organizational investments in mathematics research,” said Dr. Kloefkorn. “But we have shown that those types of investments can make a difference in public policies or national interests. This is the only math that matters.”

Many of Dr. Kloefkorn’s recent activities have revolved around data and data science. During an urban sustainability study, for example, Dr. Kloefkorn helped guide a team of researchers to help urban officials used the mountains of data they often collect in ways that benefit city-dwellers.

“We looked at what do you do with data and how do you use it to better inform what a city does,” Dr. Kloefkorn said.

Similarly, other studies used tried to answer similar questions around how to use data to deal with the US opioid epidemic and how to improve the decision-making ability of the Defense Department acquisition workforce. Each of these studies relied on others that sought to define terms and concepts such as data science and data analytics and recommend approaches to train students in the skills employers seek in data scientists now and in the future.

“There is a massive need for data scientists,” Dr. Kloefkorn said. “We are in the infancy of data science and are still evolving both education and jobs in the space.”

Dr. Kloefkorn said many of the studies developed ideas and recommendations that are either currently being employed or actively discussed, such as:

“It’s extremely useful to me as a mathematician to think of data science as a multi-disciplinary endeavor,” Dr. Kloefkorn said. “Data science is an interdisciplinary field and it should be treated as such.”

The Science & Engineering Lecture Series continues through April 9. The remainder of the lectures include: