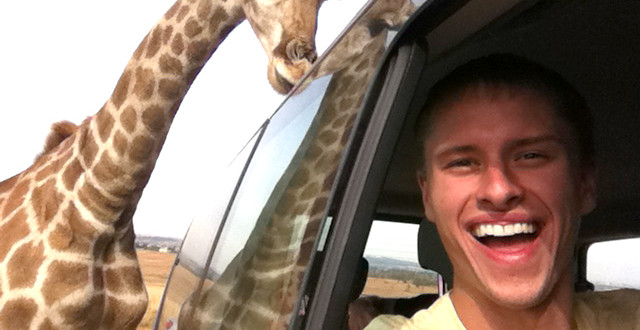 Whittenton traveled on an African safari

Just getting into Delta Airlines’ highly selective summer internship program was a rigorous enough process for Aviation Operations and Management student Nathan Whittenton. Then there was the demanding 10-week program itself to complete.

Whittenton, of Jacksonville, took part in the prestigious program as a Flight Operations Intern after being hand-picked from more than 800 applicants.

“This internship with Delta is one of the most desired in the industry and it is a tribute to both Nathan and the Jacksonville University Aviation program that he was selected over many other qualified candidates for this position,” said Capt. Wayne Ziskal, Assistant Professor of Aeronautics. This semester, another student, Stacey Byczek is completing the same internship with Delta.

“The process was very involved, long and drawn out, which was stressful,” Whittenton said. “For an internship which attracts almost 1,000 applicants per year, I was truly honored to be considered.”

This internship is indicative of the quality of students produced in the aviation program at Jacksonville University. The 4-month application process filled with conference calls and in-person interviews at Delta’s headquarters in Atlanta produced a meaningful experience for Whittenton. During his experience, Whittenton was treated as a regular full-time employee with responsibilities that would have major impact on the airline.

“What was really nice about this experience is that my work actually mattered and affected the airline,” Whittenton explained. “I was treated just like any other employee, but that also came with accountability.”

Throughout his experience, Whittenton gained knowledge about the background operations of running an airline, including special projects. Dealing with insurance for flights to Mexico and completing a STAR (Standard Terminal Arrival Route), which is provided to all pilots who fly into the Minneapolis-St. Paul airport, are two of these special projects. In addition, Whittenton received business cards and was able to make connections with different people within Delta Airlines which he hopes to capitalize on following his graduation this spring.

“I made a lot of great connections including the Vice President of Flight Operations, Capt. Jim Graham, who was a great man,” added Whittenton. “I hope to connect with him again following graduation.” Graham is set to speak at Jacksonville University next semester as a part of the Dean’s Speaker Series.

Whittenton attributes a lot of his success to the faculty members who made the connections possible for the internship, including Ziskal and former Director of Aeronautics Dr. Juan Merkt. Whittenton said, “The faculty are great in the Aviation department; it is like a family. They will help you out in any way to be successful.”

“I consider Nathan Whittenton to be one of the most outstanding students in the Aviation program. He is a focused, hard-working and engaging individual who brings a strong work ethic to all he attempts,” Ziskal said. “He is a very intelligent young man who challenges himself in all areas of study.”

In addition to his important responsibilities, Whittenton took advantage of ‘standby’ privileges as an active Delta employee.   Some notable destinations he traveled to included South Africa, France, Japan and Brazil.

“I love traveling.  So to be rewarded with these traveling privileges based on my hard work was certainly fulfilling,” Whittenton said.

Whittenton is very excited about the beginning of this school year.  He will be serving in a number of roles, including the aviation fraternity Alpha Eta Rho and the Flight Team, as well as other student organizations. Following graduation, Whittenton hopes to return to Delta or take advantage of the numerous pathway programs JU has with national airlines.