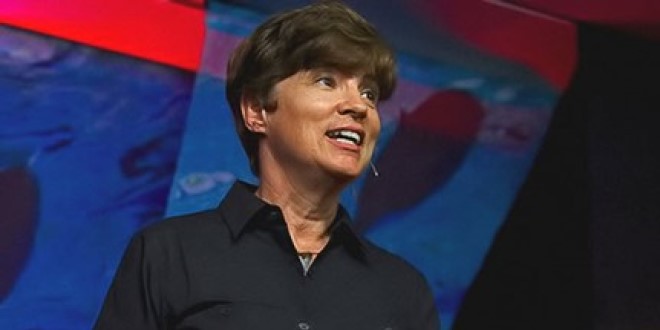 Dr. Edith Widder’s many roles and her life-long commitment to learning and teaching earned her this year’s Marine Science Pioneer Award from the Marine Science Research Institute (MSRI), which will be presented on Tuesday, Oct. 22. Dr. Widder is the first woman to receive the award.

MSRI presents its Marine Science Pioneer Award each year to an exemplary leader in marine science whose visionary leadership has served as an inspiration to others, particularly students. The recipient’s influence extends well beyond marine science to fully embrace Jacksonville University’s ideal of life-long learner, using their remarkable talents to create new opportunities to lead, live, and learn.

“She’s a real model in the field. She’s one of those people who makes you feel comfortable and brings out the best in you,” says Dr. Daniel McCarthy, Jacksonville University Professor of Biology and a one-time colleague of Dr. Widder’s. “She’s kind of a Renaissance woman. Some researchers are all about just their research. She is one of a handful of researchers who follows her curiosity wherever it takes her.”

Dr. Widder is a specialist in bioluminescence, which is the light chemically produced by many ocean organisms. She is also a leader in the invention and design of submersible instrumentation and equipment to enable unobtrusive deep-sea observations. Working with engineers, she has conceived and built devices that rely on bioluminescence to enable humans to see beneath the waves in new ways.

That led her to the most recognized accomplishment of her career: The first video of a giant squid in its native habitat.

“I love learning new things, and I love exploring. Those would be rewards enough, but the icing on the cake is the amazing light show I see every time I make a dive in a submersible and turn out the lights. It still thrills me,” Dr. Widder, who also founded the Ocean Research & Conservation Association (ORCA), a scientific-based conservation nonprofit, said in an interview posted on the National Oceanographic and Atmospheric Administration website.

Following 16 years as senior scientist at Harbor Branch Oceanographic Institute, Widder established ORCA to pioneer work in marine exploration and conservation, invent new ocean technologies and preserve the ocean. She created ORCA’s remotely operated deep-sea camera system Eye-in-the-Sea (EITS), which detects and measures the bioluminescence of nearby organisms on the sea floor and has produced footage of rare sharks, jellyfish and discovered a new species of large squid in their natural habitats.

Among Dr. Widder’s other inventions are:

Widder is also a certified Scientific Research Pilot for Atmospheric Diving Systems and holds certifications to dive the deep diving suit WASP and the single-person untethered submersibles Deep Rover and Deep Worker. She has made more than 250 dives in the Johnson Sea Link submersibles.

She was awarded a MacArthur Fellowship in 2006 and participated in the 2010 TED Mission Blue Voyage to the Galapagos Islands along with other leading thinkers and advocates of ocean conservation. Her research and inventions have been featured on BBC, PBS and National Geographic television productions. In 2012, Widder and several other scientists filmed the giant squid in its natural habitat for the first time. The historic footage aired on the Discovery Channel in Jan. 2013. In June 2019 she repeated the feat using the same camera system in US waters.