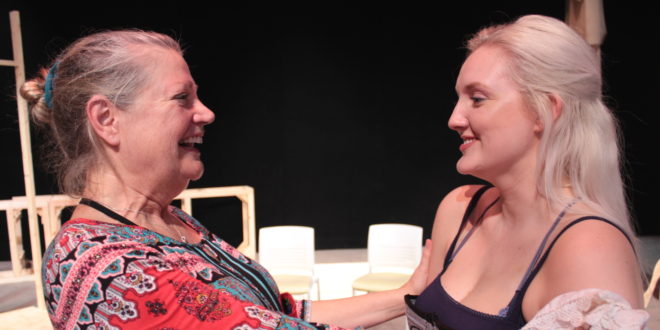 One of the most formidable female characters ever crafted will be portrayed by one of the most passionate instructors in the College of Fine Arts, as Associate Professor of Theater Arts Deborah Jordan makes her JU debut in the title role “Mrs. Warren’s Profession” Feb. 16-24 in Swisher Theater.

The play about the world’s oldest profession by George Bernard Shaw, censored in England and the U.S. as a “scandalous” and “wicked” affair when it premiered more than a century ago, will feature a cast and crew filled with JU students and Northeast Florida professionals working to bring the classic to life.

“I’m having so much fun … it’s also valuable for my students to see their professor apply what she’s teaching and what she’s been doing for so long on stage, and it’s good for me as a faculty member to be put in the same position that I’m asking them to be in on stage,” said Jordan. “It reminds me. It humbles me.”

Directed by Theater Department Artist-in-Residence and AMC TV star Erik DeCicco, “Mrs. Warren’s Profession” centers on the relationship between young Vivie Warren (sophomore theater arts major Sarah Stepp), who has enjoyed a privileged life, including a university education, and her mother, Kitty Warren, who has supported her family first as a prostitute and now as co-owner of a chain of brothels.

When Vivie discovers the truth, it leads to an emotional showdown between the two intelligent and passionate women. Packed with Shaw’s shining dialogue and robustly drawn social archetypes, it’s a challenging dark comedy with an animated debate between two sides of the cultural-generational divide.

Shaw’s provocative play, written in 1893, was banned by censors as “unfit for women’s ears.” Its first production in the U.S. in 1905 led to the arrest of the theater manager and the leading lady on charges of “disorderly conduct for presenting an immoral drama.”

Jordan, a longtime familiar face in the College of Fine Arts and award-winning veteran theater instructor, has directed more than 75 theatrical productions for professional and semi-professional theater houses, as well as educational, musical, children’s and reader’s theater. She started two professional theater companies: Characters, a professional touring company, and The Jacksonville Stage Company, where she served as Artistic Director for four seasons.

With debate now raging about the rights of workers in a global sex trade, it is important to consider the ways in which historical power and gender relations inform the present, DeCicco said. Modern media trends have given rise to the #MeToo and #TimesUp movements, allowing a powerful voice to victims and advocates that has been sought for centuries. Shaw’s play shows how women of this (Victorian) era took part in the oldest profession not out of moral indecency, but out of sheer economic necessity.

“I did this play 30 years ago playing Vivie, and now here I am playing Mrs. Warren,” Jordan said. “I’m a diehard feminist, and George Bernard Shaw was one of most famous ‘man-splainers’ of all time. Fortunately for us in the theater world, he has given a woman’s voice to explain things, through him.”