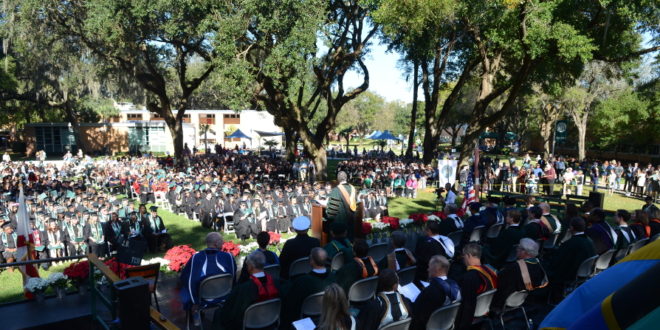 Dr. White joined the faculty in 1976 and has become a much sought-after expert on marine science and marine life in the region and beyond. He has written numerous research reports, and attracted hundreds of thousands of dollars in grants and contracts to support marine research at JU. He also founded and raised money for the crown jewel on the Jacksonville University riverfront: the $10 million, 32,000-square-foot LEED Gold-certified MSRI, which opened in 2010. (A full biography is below.)

After welcoming some of the most renowned figures worldwide in civic life, business and the arts to speak at recent Commencements and events, the University decided to honor one of its own in the STEM field, and the choice was obvious in Dr. White, said JU President Tim Cost. 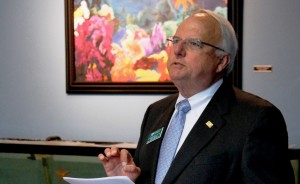 Those planning to attend the ceremony should arrive early for a good seat. Live-streaming video of the event will be available at http://www.ju.edu/commencement. Look for live updates on Twitter at @JacksonvilleU, and use the hashtag #JUgrad for social media posts.

During the celebration, the Fred B. Noble Gold Medal for Scholarship, first awarded in 1957, will be given to the undergraduates who have earned the highest GPA in their class. The seniors’ contribution to the annual Class Gift will be announced, and Capt. Neil Karnes, JU NROTC Commanding Officer, will present officer candidates for commissioning.

A Faculty Corner immediately following the celebration will be held in the shaded area near the Commencement Platform, where students can meet up for photos with their favorite professors.

The Senior Stroll is set for 3:30 p.m. Friday, Dec. 16, at Dolphin Plaza behind the Howard Building. All graduates are warmly welcomed for a group photo, champagne toast and festive march through campus to the Graduate Reception at 4 p.m. at the River House – sponsored by the JU Alumni Association. Light hors d’ oeuvres and refreshments will be served, with faculty and administration in attendance. Attire is business casual. Caps and cords are encouraged.

A. Quinton White Jr., Ph.D., is Executive Director of the Marine Science Research Institute and Professor of Biology and Marine Science at Jacksonville University.

Dr. White joined the faculty at Jacksonville University in 1976, after earning his doctorate at the University of South Carolina at the Baruch Institute for Marine Biology and Coastal Research. He has written numerous research and technical papers or reports, and attracted hundreds of thousands of dollars in grants and contracts to support marine research at JU.

He was a key drafter of the City of Jacksonville’s Manatee Protection Plan, and is a passionate advocate for these vulnerable marine mammals. Currently he is conducting research on the history of human impact on the Florida environment and especially on the St. Johns River, with a focus on manatees and water quality issues.

Dr. White he is a lifelong teacher and researcher, river and water quality champion, marine biologist, media commentator and thought leader, and environmentalist. Over his more than four-decade-long career, he has become known as “Mr. Marine Science of Northeast Florida,” and serves as an expert resource to civic groups, government agencies, elementary school children and college students.

Active in the Jacksonville community, he writes a monthly column in The Florida Times-Union called “River Life.” He is President-elect of the Southern Association of Marine Labs, Board Chair of the Southeastern Coastal Ocean Observing Regional Association and Past-President of Jacksonville Community Council Inc.

Dr. White is personally responsible for the crown jewel on the Jacksonville University riverfront: the 32,000-square-foot, LEED Gold-certified Marine Science Research Institute, which opened in 2010 and is a project he founded, and for which he tirelessly helped raise $10 million to establish.

Recent awards have included the Florida Wildlife Federation Marine Conservationist of the Year in 2015, the Regional Leadership Award from the Northeast Florida Regional Council and the City of Jacksonville’s Christi P. Veleta Environmental Award in 2014.

He was honored by Leadership Jacksonville in 2011 as a Community Trustee, received the City of Jacksonville Mayor’s Environmental Achievement Award in 2010, and was recognized as a Veteran of Influence this year by the Jacksonville Business Journal.

Dr. White served in the U.S. Army prior to starting graduate school at the University of Virginia, where he earned a Master of Science in 1972.He is married to Dr. Susan Hite White, a pediatrician, and they have three children.