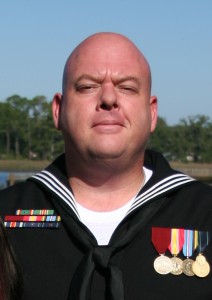 Tell us about your service experience. My entire tour in Bahrain was a challenging and dangerous experience.  Stationed in a hostile environment, under rules and regulations of a foreign nation, away from the protection of our country, our freedoms and our way of life, thousands of miles away from family and friends – it was a learning experience, and one I encourage anybody who may have a chance to live abroad to undertake.

In the Middle East during the late ‘90s, the environment changed back and forth between “Dangerous” and “Very Dangerous,” with the occasional “Imminently Dangerous” classification thrown in to keep things interesting. On deployments, we would be constantly faced with danger, both from unfriendly contacts as well as the threats so often in the news of late – non-traditional combatants. Upon my return to the U.S., I reflected on what I’d learned over the two years I was gone, and realized that for the flaws we may have, and the disasters we may make and bring upon ourselves, the U.S. was founded by people who had seen the same sort of insanity in Europe, and the world over – and it made me intensely grateful to them all again.

Any favorite classes? I have not had a bad class yet, and not a favorite yet – they have all been fantastic. Even accounting!

Tell us about JU’s role in your transition to civilian life. I transitioned to civilian life long before I began attending JU. It would have been nice to have the support of JU when I transitioned to civilian life, though, and I wish I’d known of it then. The constant contact, assistance with employment opportunities and helping to navigate through the registration process and the GI Bill process are priceless services JU offers, and offers well. The Registrar’s Office here must be one of the finest examples I’ve encountered in customer service: easy to deal with, prompt attention and careful detail.

What sets JU apart? The registration process for JU is a huge benefit. When I was looking for a school, the only schools that were as helpful, or even seemed to suggest they would go out of their way to help, were the for-profit institutions with questionable credentials – the used car salesmen of the educational world, if you will. JU was polite, easy to work with, well-organized and supportive – not pushy – of my desire to attain a secondary education.