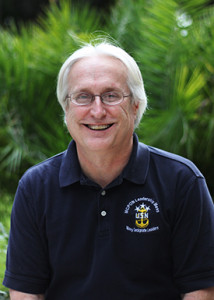 Tell us about your service experience. I was involved in response to a large fire aboard the USS George Washington. We were underway off the coast of South America when the fire broke out, and it took us 13 hours at GQ to extinguish the fire. It was an all-hands effort to fight the fire and save a national asset.  Watching the crew come together to fight the fire (which knocked out A/C and power to more than half the ship as we were crossing the equator), the salvage efforts by thousands of the crew the next day to save our food that was stored in freezers that no longer had power (we used a chain gang across the hanger bay to move each case to the forward refrigerators that had power), and the professionalism in the face of danger was inspirational to all onboard.

What are some of your memorable experiences in college? As a new student to JU for the fall semester of 2013, I am just beginning my journey toward the goal of earning a bachelor’s degree in Sport Business. My most memorable experience to date was sitting in my first class during introductions and hearing one of my fellow students say he was from Baltimore (my last duty station). I introduced myself after class, and as we began talking came to find out that I was friends with his grandfather for the past 10 years as we worked together at Fort Meade, Md.

Any favorite classes? I would say my Introduction to the Business of Sports Management is my favorite class. My favorite experiences have just been speaking with all the other students before and after class as well as around campus. I wasn’t sure how I’d fit in as the “old man” on campus, but everyone has been very friendly and accommodating.

Tell us about JU’s role in your transition to civilian life. I think being in a college environment such as JU has helped me to “ease off the accelerator” a bit, slow down and appreciate what a great learning environment is available to all of the JU students on this campus.

What sets JU apart? I’m still trying to find my way but the folks in the VA office were very helpful in getting me started on my road back to college after almost 30 years. I walked in weeks before the semester started thinking I was destined to start in the spring semester, but Veterans Coordinator Ines Paulino-Chindra guided me every step of the way through the VA process, and Tonya Alford really pushed my application package to get me started in the fall semester. I thought the Veteran’s Briefings the week prior to classes were extremely beneficial. I also think every student veteran here at JU should be an active member of the SVA; it seems like a great organization and resource for all of us pursuing a degree at JU.

What might surprise others about you? That I spend much of my time outside of the classroom doing home renovations. I am currently renovating a townhouse in Orange Park for my daughter. I just finished gutting the kitchen and putting in new cabinets, appliances and a new floor. Next on the agenda are renovations to both bedrooms!