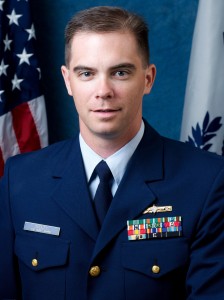 Service: 11 years, tours in Search and Rescue, Marine Safety, Military Out Load and Coastal Riverine Warfare, including a tour in the Middle East.

Tell us about your service experience.One of the neatest experiences in the military for me has been to encounter other JU graduates during my service. Often on the bridge of a ship I could find a lot of Naval Academy graduates, but I also found JU grads in great numbers, especially in expeditionary warfare. Some were ahead of me in class year, and some were behind. A JU grad is special. They are humble, approachable and realistic. Especially in expeditionary warfare, when you are not on big ships, you need to be creative, self-reliant and able to do more with less. More than anything, it’s about the people on the ship. And those people can make or break you when it’s just 12 guys boarding a 700-foot ship to do an investigation or a search. You count on each to have your back. If you don’t have that, your day is going to end very differently.

Who were your influences? Some of the major influences in my military life were JU grads: Chuck Walker, Dennis Turcotte and David B. Larsen. All are U.S. Navy and were very influential to me. Their behavior influenced me. I remember meeting Chuck Walker as an undergrad at a JU phone-a-thon, and I was impressed by his full career. It gave me something to strive for. Dennis and David, they always went above and beyond, and that inspired me.

Tell us about JU’s role in your transition to civilian life. What really helped me coming out of JU was learning how to transition from one responsibility to the next seamlessly. At JU I was involved in many organizations as an undergrad — I was 4-year oarsmen with the JU crew, a 4-year Phi Gamma Delta member, a student athlete and more. You have to move from one role to another every day. JU helped prepare me for my current evolving profession. Not only that, I now have to be able at the drop of a hat or text message to transition from civilian life into military life to address whatever the need is. So an ability to shift gears is important.

What sets JU apart? For one, the weather here is fabulous. Another is the boutique experience of a small school. I knew I wanted to be an international business major, and JU offered that. JU also offered me the opportunity for an overseas internship, as a sales analyst for a paper-converting factory.

Any advice for younger student veterans? Dive into life before and after you graduate. You can be successful at anything you choose to do, but you have to put the effort in as a student to reap that benefit later, so dig in.