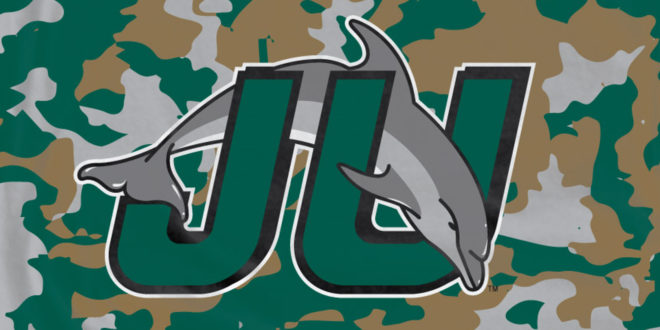 The Dolphins’ match-up against San Diego at noon this Saturday, Oct. 21, is dedicated to the soldiers, marines, sailors, airmen, Coast Guardsmen and their families of the Jacksonville University military community.

Military and Veterans Appreciation Day is a JU tradition, and football team members will wear their helmets with the military unit stickers of JU military students; military alumni; and Northeast Florida Navy, Marine and Army units.

“These unit stickers represent the selfless service of the men and women who serve our country so we can remain free,” said Mike Mitchell, USN (RET), Veterans Student Coordinator for Jacksonville University. “We are very proud of our University’s military heritage, and we will continue to strongly support our veterans, active-duty military and their families.”

JU is home to almost 400 active-duty military and veteran students, along with more than 100 spouses and dependents. With a valid military ID, all retired and active-duty personnel and their families will receive free admission.

The opening ceremony of the game at D.B. Milne Field will include a pass-in-review, a longstanding military tradition that began as a way for a newly assigned commander to inspect his troops. The reviewing officials for the game are Capt. Neil Karnes, Commanding Officer of Jacksonville University’s Naval Reserve Officer Training Corps; and retired Captain and former JU NROTC Commanding Officer Herbert Hadley, now Professor of Naval Science at Mandarin High School.

During the half-time show, the University will honor Faculty/Staff Veteran of the Year Charles “Chuck” Harvey, a U.S. Navy veteran and Clinical Assistant Professor of Nursing in the Brooks Rehabilitation College of Healthcare Sciences. The Military Spotlight Award will be presented to Leonard Krupski, a sociology major senior and U.S. Navy veteran.

Single-game tickets to the public are available for purchase day of game at the ticketing booth or at JUTickets.com. General admission tickets are $10, children four and under are free, and students and faculty are free with a valid JU ID.