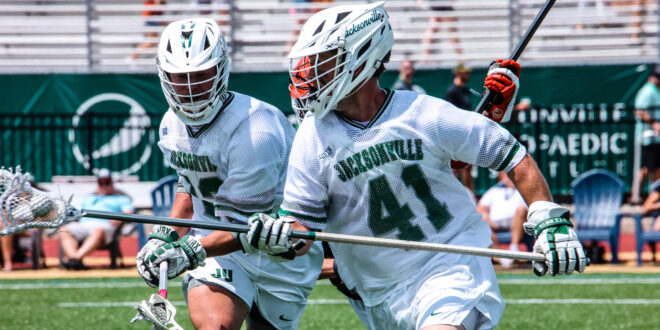 No matter what happens in postseason play, the JU Men’s Lacrosse team has had its winningest season in its 11-year history, setting the tone for a new era of lacrosse in Jacksonville.

Taking down top-ranked programs like Duke and Denver were clear highlights of the season, but Head Coach John Galloway said there are more takeaways from the season than those stand-out performances.

“Those games aren’t a flash in the pan. They’re a product of a lot of hard work,” Galloway said. “We started on August 16 and it’s April 28 and we’re still playing with the hope of extending our seasons.”

The team faces Virginia Military Institute in the SoCon tournament semifinal May 5. The matchup comes after JU won the Southern Conference Regular Season title against Mercer April 23. Winning the tournament would mean a trip to the NCAA Championships.

Galloway said the season’s success was thanks in part to each of the 60 men on the squad, especially the way players stepped up to lead the team. Fifth-year graduate students chose to stay an extra year on campus to take advantage of their final year of eligibility, and it’s made all the difference.

“It’s been a product of a lot of trust and faith over the last five years,” Galloway said. “This certainly doesn’t just happen without the pains of the previous seasons and the experience our older guys have of going through some trials and tribulations.”

Defenseman Colin Hinton is arguably one of the best in the country, Galloway said. He’s in his final year of eligibility as a graduate student. Others, like midfielder Jeremy Winston and defenseman Dixon Smith chose to do the same, and made significant impacts this season.

Transfer players like Max Waldbaum, who came to JU from Tufts University, have scored points in 47 consecutive games.

Recruiting top players will only get easier for the Dolphins, but it’s already seen a boost from the completion of the Rock Lacrosse Center, Galloway said. It’s a crucial piece in making Jacksonville the Lacrosse Capital of the South, as the only Division I program in Florida.

“It’s made a dramatic impact, the ability to walk into a building,” Galloway said. “That allows us to bring in families, not just kids, but families, and show them that we’re built for success. We’re built for academic support, we’re built for athletic development, and the building is just the tangible piece that shows that.”

The success of this season will continue to push the program to new heights, and recruits for next season are already aware of how high the bar will be for them going forward.

“I think this season just simply raises the standard for our expectations,” Galloway said. “The expectations when you get on the campus are a little bit greater, the measure of success here has changed and how well we handle that success and continue to demand more from our locker room will dictate whether or not we can keep this going.”